WOMEN AND SAFE MEN
By Andy Weddington
Friday, 18 May 2018


A man who wants to lead the orchestra must turn his back on the crowd.  - Max Lucado

A few days ago at the grocery store deli counter one of three women (all well my junior) struggled to open a large jar of dill pickles.

I was the only customer.

She gave up. And did not ask the other two women but while passing the jar over the counter asked me to open it.

She offered thanks and went about her business.

Yesterday morning a crew showed up at our home to remove a bulky safe weighing about 1,000 pounds.

Not an easy task.

In the basement there was but one way out - up a flight of a handful of exterior cement steps, across 10 or so yards of soft lawn, and onto a truck.

There were six big men. Four built like a moose. The other two sturdy.

Observing, as additional eyes for safety, I praised the movement coordinator for good judgment and decision-making. More to that point momentarily.

The lead man was impressive. Once the safe was rigged and carted he chalk-talked every step, in detail, of the movement. He ended saying, "Should anyone feel uncomfortable or see anything unsafe at any time then speak up so we can pause and regroup." To a former base safety officer, that was heartwarming. 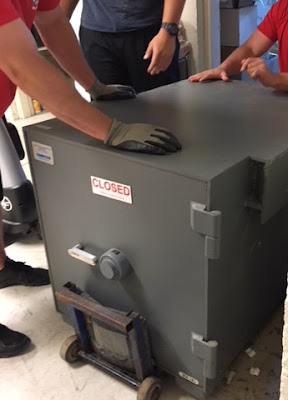 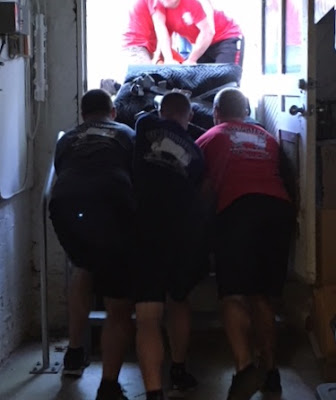 The safe men, through smart use of gear and pure power and without hiccup, moved the safe out of the basement and onto the truck.

Now, to the movement coordinator.

She was a petite woman.

I praised her aloud before the men. Stressing that in these days of political correctness and gender neutrality it must have required great courage to show up with a team of only big, strong men.

The men laughed. So did she.

Not amongst the lead man's brief to his team were the words "hope," "pray," "wish," nor "dammit, if we only had a woman to position on that one corner this move would be a piece of cake."

A lesser team could not have moved the safe.

A male customer at the deli had to open a jar of dill pickles for three women.

Again this week I read the Marine Corps is restructuring the rifle squad. More and heavier (and more lethal) gear for the Marines to shoulder forthcoming. All the while the push (though hard data - through carefully controlled test and evaluation - confirmed women do not perform as men while incurring greater injury) of women into ground combat units, including infantry, continues.

The logic escapes me.

"People sleep peaceably in their beds at night only because rough men stand ready to do violence on their behalf." George Orwell

Substitutes for size, strength, and stamina there's not.

Some things women cannot do.

This week I experienced two - (as silly as it may seem at first blush - but germane) opening a jar of pickles and (absolutely relevant) moving a heavy safe. And I once led and served alongside rough men trained and poised to do violence so others could sleep peaceably.

To this day, after deep and long reflection, I cannot find any place for women in the infantry (nor ground combat for that matter). And so do not sleep as peaceably as I might.

Praise for the men, and women, supporting this nonsense?

Now now Colonel. Certainly the right group of women could have handled this move safely had they been trained to do so and had grown up moving safes. Certainly these men come from a long line of safe movers. They therefore had an unfair advantage. Our society at large has never permitted women to move safes. They’ve been excluded from participating. How can we expect them to know how? The base maintenance department needs to hire more women and place them in positions wherein they can have the opportunity to perform such tasks. Just give them the opportunity!

Dear “Unknown,”
Thank you for the witty repartee.