There is no possession more valuable than a good and faithful friend. Socrates

For 20 years a Datsun 720 basic pickup my ride and pride. No frills. No A/C. No radio (dad helped install a cheap set post purchase).

By no means did that truck qualify as a chic magnet; dashing Marine bachelor or not. Rather, time and again, it proved the consummate discriminator; and eventually landed a keeper.

The truck long gone but not the woman with a wonderful sense of humor.

Mechanics entrusted with the rest.

And for Rex that truck ran all those years. And was still in top working order, in large part thanks to Rex, when donated to charity.

Rex owned his own shop in a nearby town.

Good fortune it was to stumble on him in the early 90s.

I needed more than preventative maintenance.

A week or two later I visited his home - to meet and draw the boys. Good sports; it's no easy task for a preteen boy to sit still (but it helps when dad's around).

A few years later on to the Big Easy - where I donated the truck.

Another 18 years or so passed before we returned to the same area of Carolina we now call home.

But the door unlocked so I stepped inside. Two young men came from the bays.

I introduced myself and asked for Rex.

They said Rex was not well and the shop closing.

"Do you know if he's up for visitors," I asked.

"He'd love a visit," and they gave me a number.

That evening a short text to the number.

I introduced myself by mention of Rex working on my truck for years with his last services swapped for charcoals of his sons.

His wife replied, "We are asked about these drawings a lot. I am so proud of the boys and their pictures. I love to tell the story of how all this happened."

And she went on to say because of the Christmas season, doctors appointments, and busy family life, a visit after New Years would be best. She and Rex were looking forward to it.

Just as post-holiday life was slowing ...

On the 29th of January my wife and I journeyed to Kansas City to bid farewell - 30th and 31st - to another longtime friend who died unexpectedly on the 22nd. We'd visited with Bret and his wife less than four months earlier.

Rex was on my mind; need to arrange that visit.

This morning something told me to look into Rex.

The two young men met at the shop a few months ago his sons.

They did not remember me but the elder remembered the drawing visit.

A treasure my painting (done the morning of donation) of the truck Rex masterfully serviced. 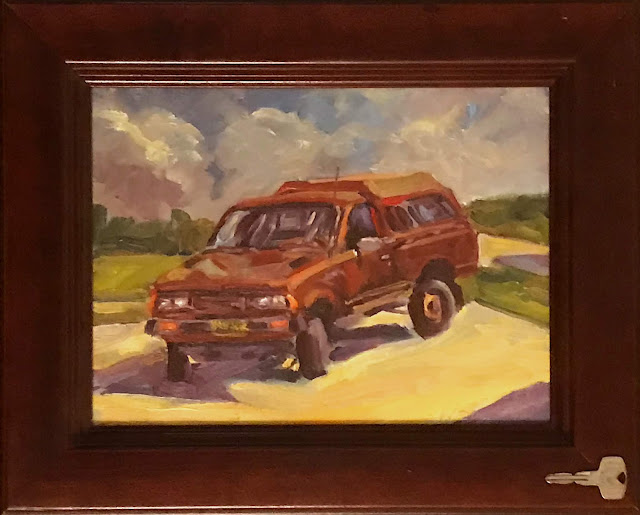 My Truck
8 x 10 in.
oil on canvas
(original ignition key)


A treasure the photo his wife snapped and sent me. 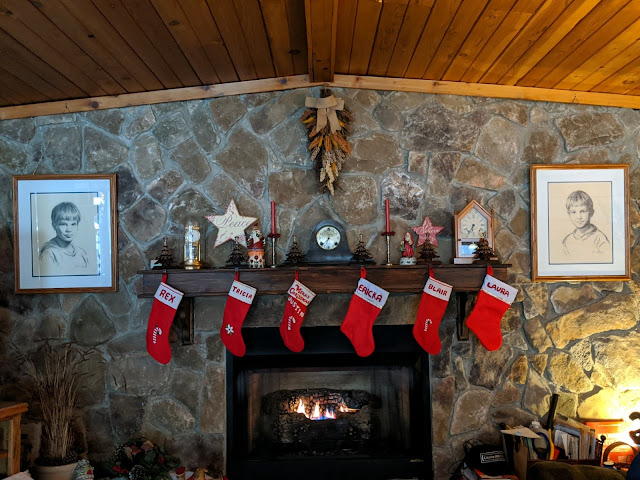 I did not sketch Rex in charcoal.

But a short 'sketch' in order. Rex was a guy's guy. Bigger than an average man, strong, I remember him as unpretentious and a good man quick to smile and laugh. He was casual and straightforward. When it came to work, fixing cars, he was brilliant and honest and fair; that explained ever-full bays and loyal customers. No doubt he raced the same way. More words escape me this morning. How serendipitous to post tribute on a big race day.

A little more about Rex:
https://www.bridgescameronfuneralhome.com/obituary/Rex-Deffenbaugh

Farewell, Rex, my friend; memories racing.
Posted by A Colonel of Truth at 8:32 AM

Andy, great post, it is amazing to hear about all the great people that influenced us in the littlest of ways. A smile, a handshake, or a simple act of kindness may impact the life of another for a life time. Love reading it. thanks and knowing you I know this was from the heart.

One of your best Andy. Thank you.

Beautiful, Andy. I love what you wrote and the inclusion of the art. The painting of your truck (with its key in the corner, I assume) ia perfect. And how wonderful to see the sketches of the sons. Beautiul.
I've lost several friends this past year, people with whom I'd been friends with for more than 50 years. One dear friend of only 25 years. And I've had the same kind of feeling you mention . . that feeling that I should check on them or get in touch. Dreams, sometimes, too, of those friends. Then the news that they died.