THANKS - GIVINGS COURTESY OF MARINES

For the 8th time.

With each passing year, a struggle it is to imagine life not having made the decision four decades ago to challenge the test(s) of becoming a Marine.

Most likely, a painter instead - which this year, for being a painter, complementing commentary is the below crop from a portrait of a Marine - a pal - too retired whose ("brother") friendship goes back to our lieutenant days. 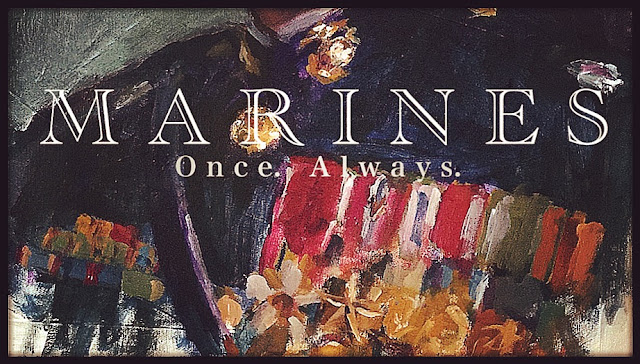 "A Marine should be sworn to the patient endurance of hardships, like the ancient knights; and it is not the least of these necessary hardships to have to serve with sailors." Field Marshall Bernard Montgomery


Not everyone can be a Marine.

Not everyone wants to be a Marine.

It was a Marine who came up with, "Once a Marine, always a Marine." - a credo, of sorts, dear to Marines.

Describing the life-changing experience of being a Marine escapes mere words. The "givings" - lessons - learned courtesy of Marines abound.

Early Thanksgiving morning (now seven) years ago (spouse forward-deployed), while still horizontal and mulling over the day ahead, some of those "givings" came to mind and so a thought to note and post as comment.

Though without time for careful edit, a snapshot of what Marines gave me - in understanding that ...

It's a privilege to lead Marines - obedience is by law but following is earned through example, confidence and trust in, and by choice.

Marines respect, and follow, example - in thought, word, and deed.

Marines are the most creative, sometimes constructively, people I know.

One Marine on hand is good. Two Marines is better. With three (or more) Marines, stand by to be wow'ed.

If two or more Marines, one is always in charge. Otherwise, it's just a mob. Marines do not mob. Nor do Marines loiter. Marines mill - smartly - about the area awaiting orders.

Marines are capable of accomplishing missions even they might have thought, if only for a passing instant - admittedly, that's rare, impossible.

Marines will sacrifice and endure provided leadership is with them - out in front.

Marines expect to make do with what they have - carried on their back.

Marines that are young like to have a good time.

Marines that are middle-aged like to have a good time.

Marines that are old like to have a good time.

Marines that are real old like to have a good time - but have finally acquired the wisdom to call it an early evening.

I never met a Marine - young, middle-aged, old, nor real old - that didn't like to have a good time.

Marines are drawn to danger.

Marines savor the smell of gunpowder, sounds of friendly artillery, sights of friendly aircraft, and the announcements, "Hot chow" and "Mail call!"

If Marines quit complaining, something is wrong. Start asking questions.

Bored Marines is not a good thing.

Bored young Marines is a terrible thing - a condition set for looming disaster. Find something for them to do, immediately.

Marines respond to fairness, compassion, an encouraging word, questions about their family, and a public pat on the back.

Marines do not require much - simple chow (hot once in a while), water, ammunition, a change of socks, and more ammunition meets nearly all needs. And mail.

Marines do not sleep. Marines recharge in order to continue moving, communicating, shooting, attacking, and reloading - and that applies to training, battle, and liberty.

Marines and Sailors get along.

Marines and corpsmen get along great.

Marines married to Sailors get along famously - once established, gender and rank notwithstanding, the Marine is always senior (and in charge).

Marines in dress blues attract and hold attention. Even a beautiful bride has trouble competing. Ergo, back in the day, smart Marines wore dress whites at their wedding, and gladly went unnoticed. A photograph on a table in our home proof of smarts.

I am thankful to be a Marine.

I am thankful to have led Marines (and Sailors).

I did my best.

I surely could have done better, always; God knows and so do Marines.

Two notable memories as a young Marine critical to seasoning an older Marine...

As a first lieutenant and series commander at Parris Island ...

Recruit  Hurst, J. E. (Jerry), age 17, died (natural causes) early morning on Saturday, 01 October 1983, first day of the second phase of training. He wanted to be a Marine. His Drill Instructors - Gunnery Sergeant Ciccarelli; Staff Sergeant Eversmeyer; Sergeant Ernst (men I will never forget) - were turning him into a Marine but he still had a long road ahead. Highest Authority had a different idea for Recruit Hurst. I've learned you never forget a death - he's crossed my mind every day since. And already did this morning.

As a captain and commanding officer ...

A difficult decision disciplining and punishing a young Marine sergeant - a good man, a good Marine, who made a poor decision with bad results. Disappointing. He was remorseful, sincerely. Adjudication was fair with leniency. Decades later we crossed paths. He thanked me - for changing his life. He retired a lieutenant colonel. How I treated him forever changed me, too. It made me a better officer, a better Marine. Neither of us, at the time, had the wherewithal to appreciate the full perspective of our office encounter. Only time provided depth and clarity. And doing the right thing turned into a great thing.

And, like every Marine, there are scads more memories at every rank, without time nor space nor audience patience to retell.

So, moving on, I learned learning to lead Marines is never-ending, it's an art. And just when you think you might have it figured out, you don't. Something odd happens - life. Aging. They get promoted. You get promoted. And new Marines report for duty. And all the Marine, people, dynamics change. Missions change. And so it goes while leaning on the essence of leadership, the goals - 1) Accomplish the mission; 2) Take care of the Marines. It's pretty simple. It's pretty damn complicated. Somewhere between the goals there is balance and there is the test of leadership.

Thanks - for givings, Marines!

If only it was possible to start anew. I would do better, always.

Uniform days past, these days, like today, are devoted to occasionally writing about Marines and things Marine. I do my best, always - for want of not disappointing the young, middle-aged, old, and real old Marines I know. (Note: My Regimental commander - 6th Marines - from lieutenant days regularly reads and sends me encouraging notes signed with only his first name. To rank, we're peers. But not really. I address him, Sir and Colonel. I'd not want to disappoint him.)

Time and change are forever partners. But the Marine Corps has somehow, thus far, preserved the envied secret formula for making Marines. For I've yet to meet a Marine - young, middle-aged, old, real old - that didn't have a spark in their eye and spring in their step. Nor have I yet to meet a young Marine who could not carry on an interesting conversation with a real old Marine - and vice versa.

Whenever I see a Marine; say or see the word "Marine"; hear the Marines' Hymn; or look at our eagle, globe, and anchor - a chill; to the bone. Marines understand. Real old Marines really understand.

For today, America's national holiday dedicated to giving thanks, here's to hot chow aplenty, ample cold cheer, and warm camaraderie with family, friends, and Marines. And a prayer for our Marines and Sailors (soldiers, airmen, and coast guardsmen, too) in harm's way. And here's to you, Skipper - too far away!

one of the first things learned about being a Marine and leadership seems fitting as the closing...

But the greatest of loves,
the quintessence of loves,
even greater than that of a mother,
is the tender, passionate, infinite love,
of one drunken Marine for another."

With raised glass, our Commandant closed with,

"Semper Fidelis!"
Posted by A Colonel of Truth at 6:37 AM