When the solution is simple, God is answering. Albert Einstein

Yesterday afternoon I painted a couple of portraits.

In the flower box.

And on the porch, as if sentry, at the top of the stairs.

Last night, aglow in the starboard flower box, Jack, and a mate in the port flower box, greeted costumed children.

Some said they like them. But that probably ploy to get more candy.

Early this morning - dark still - I put new candles in the mates and brought them to life one last time. Soon their "death." Their portraits my Halloween treat; to endure. 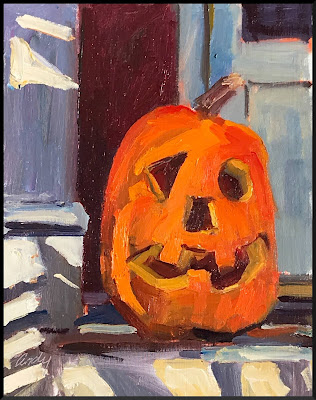 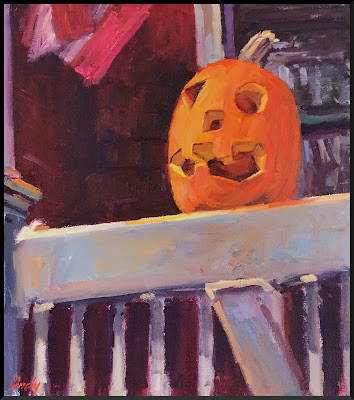 While painting I thought about the 'looking for treats' caravan marching toward America.

Earlier in the day I listened to talking heads (read thoughtful articles, too) - some scholars most not.

The not scholars spoke to word cherry-picking, what was meant, how they felt, and argued from emotion.

Fact and logic versus fiction and not logic.

In reality most problems are not complex.

But for some perplexing reason mankind is uniquely skilled at turning simplicity into a mess. Damn the cortex!

Last night a young trick-or-treater accompanied by his dad came to the door. Too short for the bell, he banged on the bottom pane of the storm door.

I responded from comfort of seat and at dad's prompt, "trick-or-treat!"

I praised the costume and dropped a few small candy bars into his bag.

He immediately looked to see and said, "Dad, this is not the chocolate I like." "Can I see," as he took a couple of short steps forward to come inside, "what else he has in the basket?"

Dad and I laughed.

Feeling a little sympathetic for the little guy, "Wait a sec," I said, holding up another type of chocolate bar, "Is this what you like?"

So I dropped the bar into his bag and they were off.

He got away with an extra candy bar.

Returning to my book and thinking about it it occurred to me here was a complete stranger who knocked on my door, essentially demanded goodies, was not satisfied with the goodies delivered, and protested. [Good thing he was only a couple of feet tall and under 25 pounds.]

Now imagine a stranger, pregnant or not, breaking into your home, settling in, and demanding your home, cars, bank accounts etc.

Are you obligated to meet (any of) their demands?

That's the essence of this caravan matter.

I bet the young trick-or-treater's dad does too.

Not scholars continue their tricks.

But man are we the people getting a bargain, a treat - our President is working for free; everyday not just Halloween.

And, like Jack (who patiently posed twice), he is not complaining.

Maybe one day he will sit for me; with a little jack in return.

Caravan coming. Those poor folks. The MSM walks alongside a mother and child waving holding an Ecuadoran national flag crying the blues about their needs. Hmm. As Marines we understand a little about logistics and what it takes to move a 3,500 to 7,000 group of people across hundreds of miles of terrain. Why has not the MSM asked: where do they sleep, what do they eat, where do they shit, where do they urinate, who is paying for their food, lodging, medical care, etc, etc? Did these people wake up one morning and say, "Hey, let's all march to America and arrive on their election Day." This is hilarious, this is actually funny that no one is asking any serious questions. Oh well, it is what it is. Some calculations of interest to me.