WHAT HAPPENS TO YOUNG PATRIOTS?

WHAT HAPPENS TO YOUNG PATRIOTS?
By Andy Weddington
Monday, 10 September 2018

All I really need to know I learned in kindergarten. Robert Fulgham

The presiding officer was an Air Force (Guard) major general. He began his service in 1978 as an enlisted Marine. Patriot.

The honored guest was an Air Force general (4-stars). Patriot.

Each of the generals spoke briefly - complementary, though not planned, with patriotism and (national) strength as recurring comments.

Before the ceremony I spotted a hand-written poster mounted on a wall aside a manned security desk.

After reading, a photograph in order. 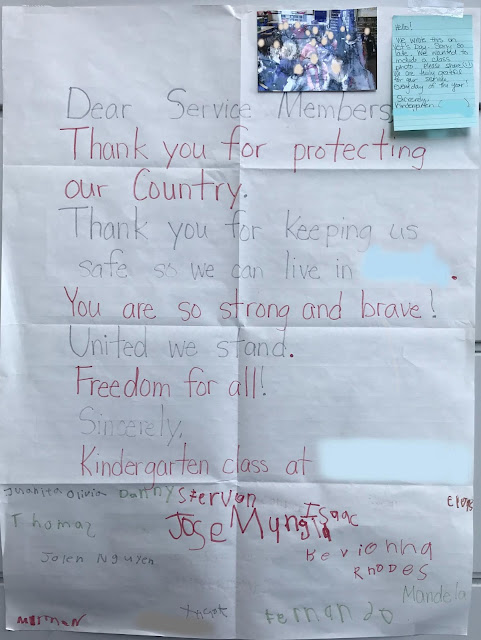 A class of kindergarten children had visited the Guard headquarters.

The teacher's note on the blue post-it upper-right-hand corner apologized for tardiness of the note but she wanted to ensure a class photo accompanied it. [For privacy, I obscured faces and the school's and teacher's names.]

In the photo the children are smiling. Their faces a nice complement to the genuine gratitude expressed in their thank you note.

So what happens to young patriots between kindergarten and college that turns some into antagonists of America and our military?

It's not a rhetorical question.

Any number of reasons come to mind, but no good ones.

For the past few days media has played clips of our 44th President's (believed to have attended kindergarten) recent speech, with insults and attacks on our sitting President, delivered at the University of Illinois at Urbana-Champaign (a college).

He staked claim to some of the success(es) (e.g. booming economy) being realized through the policies and work of President Trump.

Everyone - kindergartner to collegian - is entitled to an opinion, even if knowingly false.

But others know the truth.

In all likelihood, about half the audience was not the patriotic kindergartner. What soured their milk?

The latter complements the former - to ensure its survival and endurance.

This morning I wonder ...

When is our Constitution first introduced to school children - appropriately framed for age - and how frequently is it required material through college graduation?

Is our National Security Strategy (NSS) introduced (age appropriate, of course) to school children - and how frequently is it required material through college graduation?

Our current NSS takes less than a couple of hours to read. And it need not be tackled in one sitting. It is more manageable time wise if read by each of the four pillars.

It could easily be crafted in a comprehensible way for kindergartners to college students.

Is there another sensible way to educate and develop love of country than by reliance on two critical documents - our Founding papers and the current guidance to protect and preserve those Founding papers (and our way of everyday life)?

Granted, this was not the approach during my youth. But this is a different day; calling for a different approach.

There was kindergarten age children, college students, and youths of all ages in between at yesterday's retirement.

I pray the ceremony's pomp if not the purpose made a lasting impression on each and all.

It sure did on me.

Though as good as the Army Song (ending the ceremony) it's not the Marines Hymn.

The "Marine" general and I, the only two Marines at the ceremony, had quite a fun post-ceremony conversation. He was a Marine! And remarked more than once how grateful he is for his Marine roots.

If you've not read Robert Fulgham's book - by the same title as the opening quote - I recommend it.

Here, Sir, you address the very core of our struggle to preserve our precious Republic. Leftists have removed from our schools every trace of educating our young about why America is in fact Exceptional.

I believe this can be reversed but we have to first turn around the young teachers and parents going along with this mis-education who buy into the guilt and victim-hood propaganda they were defiled by in our schools. "It is easier to be fooled than to be convinced you were fooled" is in operation.

Serious work is going on to educate the public about the devastating curriculum being inculcated.
Thanks for your writings!