OMAHA - MAY THE LESSON SINK DEEP

To Omaha, Nebraska, I'd not been until last Spring.

Barely in town six weeks a tornado spun, literally, over the top of our home.

The storm claimed no human lives in our neighborhood but it devastated structures, cars, and decades old giant trees snapping them as if twigs.

The strewn debris looked somewhat like a defended beachhead or lawlessness and disorder.

We made the one-year anniversary without repeat. So far.

Saturday past we visited The Durham Museum in downtown Omaha. It was once a bustling rail station - 1931-1971 - handling more then 10,000 passengers daily during its prime.

A walk-thru of train cars give a sense of the day.

Was it as glamorous as it seemed? Most probably it was not. It just was.

Colorful in every sense of the word.

From race to religion to rather lawless racy live styles.

Those were the days. But not always good.

Some men were evil.

A nightmare they made.

Part of a display on law and order caught my attention.

Thinking about our compromised Department of Justice with lawlessness within government, the brief passage thought-provoking, germane.

May the Lesson Sink Deep

"...Omaha has had an experience in lawlessness. We have seen, as in a nightmare, its awful possibilities. We have learned how frail is the barrier which divides civilization from the primal jungle - and we have been given to see clearly what that barrier is. It is the law! It is the might of the law, wisely administered. It is respect for the obedience to the law on the part of members of society! May the lesson sink deep! 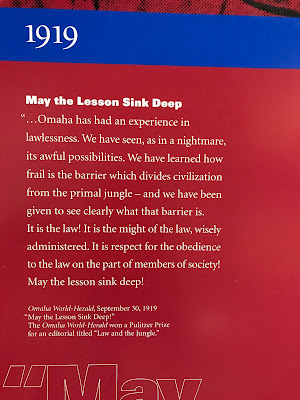 More disorder, too there was an aftermath photo of a March 1913 tornado.

And to the contrary, order and law, there was a display dedicated to the military service of blacks - in all branches of our armed forces.

The section on U. S. Marines featured Sergeant Major Gilbert "Hashmark" Johnson (who also served in the Army and Navy). In one photograph of him standing before a formation nothing was out of order.

Our Dress Blues have stayed the same. Though I wonder with worry when some evil will destroy those, too.

Continuing through the museum the lesson was sinking deep.

Could whomever had written that passage envisioned corruption within our nation's top law enforcement?

It is so simple the lesson.

Respect for the obedience to the law - by society.

How critical it is that respect not be compromised by those members of society entrusted with the highest levels of law and order.

For with that the complete primal jungle.

Catastrophic the "tornado" damage - trust and confidence destroyed; snapped like a twig.

So, Mr. President, your good duty is to build and bind. The jungle to tame. 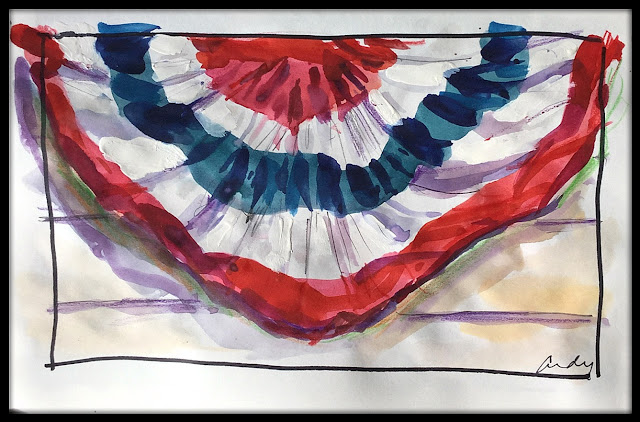