Ignorance, the root and stem of all evil. Plato 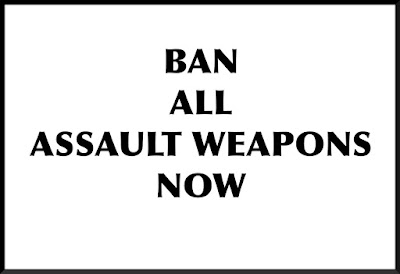 Catching up on morning news a photograph of a protest and a youth partaker holding the above sign caught my attention.

First thought: I've been a Marine 38 years. Trained an infantryman. An e-tool, helmet, and tent poles and stakes amongst gear taught to be used as "weapons of opportunity" - assault weapons.

So now, what, exactly, is an assault weapon?

Second thought: The sign holder an idiot. Ignorant. And could not have made a better self-declaring statement (of idiocy and ignorance).

Third thought: Compulsory military service would teach (educate) our Constitution; imbue an understanding of how weapons protect our citizenry from enemies (including government) thus curing, for the most part, idiocy and ignorance.

Fifth thought: With my fill of idiocy, ignorance, and stupidity, time to wander outside to paint.

Some painting gear could be used as an assault weapon.

When will potentially lethal brushes, paint tubes, and painting knives be banned?

With our "education" system expounding, exponentially, the problem.

But a little time in uniform would do every able body some (necessary) good.

More importantly, in turn, America a lot of good.

Give it some thought, Mr. President.
Posted by A Colonel of Truth at 11:49 AM

I am reminded of Gen Kelly's comment about the ignorant FL Rep Frederica Wilson: "Empty barrels make the most noise."
No surprise there is so much "noise" coming from the ignorant masses over "assault weapons." Not one of them could participate in a meaningful conversation on what an "assault weapon" is, vice is not. Pathetic, disgusting and, most troubling, potentially dangerous.