You can tell by the kindness of a dog how a human should be.  Captain Beefheart (Don Van Vliet)

With Irma zeroing in on his home town, a longtime Marine friend living along the west coast of Florida shuttered his home, loaded three bulldogs into his truck, and sought safer accommodations.

Now home we spoke the other day and though much to be done the damage could have been worse.

I asked about the dogs. He laughed - they're none the wiser to all the commotion. They had food, water, plenty of sleep and were dry.

What more could a dog need? Or want?

But to the contrary what an example of a human taking care of family, his loyal friends.

In contrast, I've seen news reports of (lousy) humans who fled and abandoned their dogs (other animals, too).

Much can be deduced of a human who abandons an animal.

Much can be deduced of a human who risks their life for an animal.

Surround me with the latter, please.

Never have I known any person named Oliver.

A while back I penned commentary supporting a candidate running for Congress whose name is Oliver but I never met him. He's a retired Marine (a judge I know [but, too, have not met] vouched for him) with sensible positions. I've no idea if he qualifies as handsome but suspect his wife certainly thinks so.

I know one woman named Olive.

Olive is an artist.

Not famous but a few years back I bought a piece of her art - an old, weather-beaten, rusty, flattened tin can painted bright yellow (representing sand); cobalt blue (sky); flowering (red) cactus (green). Rusty Bit 5, created three years ago, hangs in a prominent place in our home. It's child-like but a child could not have done it. I love it for her idea and the repurposing of something someone discarded in the desert as useless. It's beautiful. It's handsome.

Children naturally see things that way but rare is the adult who so sees (and is able to keep the work simple as a child's [a goal of Picasso]).

But on to handsome Oliver - Ollie to friends and family.

He packed a lot into his short life.

He saw four kids through childhood, adolescence, and into adulthood - who all matured into responsible, good all-around citizens. A noteworthy achievement, anymore.

And daily he quietly did good deeds that oft went unnoticed.

For one great deed I am most grateful.

He visited my ailing father in the hospital.

Oliver needed that visit but didn't fully appreciate why (as far as I know).

In one hand rather sad but I see the other hand.

The other day, amidst all the Irma coverage, I happened upon the one photograph I have of that visit. And decided to include it (less most of my Dad not in the best of shape but whose facial expression, trust me, mirrors Oliver's) today. 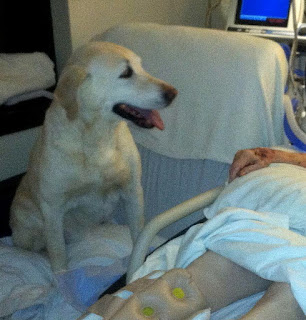 Not present but hearing summary of the visit, I recall that Oliver wagged his tail. Dad would have if able and vigorously petted his pal.

While looking at the photograph and reminiscing about Dad and Oliver it dawned on me I'd painted Dad's portrait and portraits of two of his other pals, Ruby and Darby, but not Oliver. And I don't know why not.

That it's a bit more than three years since Oliver died irrelevant - better a family portrait late than never.

So a few days ago I painted Oliver.

When finished and looking at the portrait I thought what a handsome fellow thus the title 'Handsome Oliver' struck.

Which led to a decades old memory from another Marine pal who once posed (me) the question, "Do you know the difference between a beautiful woman and a beautiful dog?"

To which I remained silent long enough for him to answer his question, "A beautiful dog does not know it's beautiful."

Oliver did not know he was handsome. But that he was. And a loyal pal to all whether handsome or not. 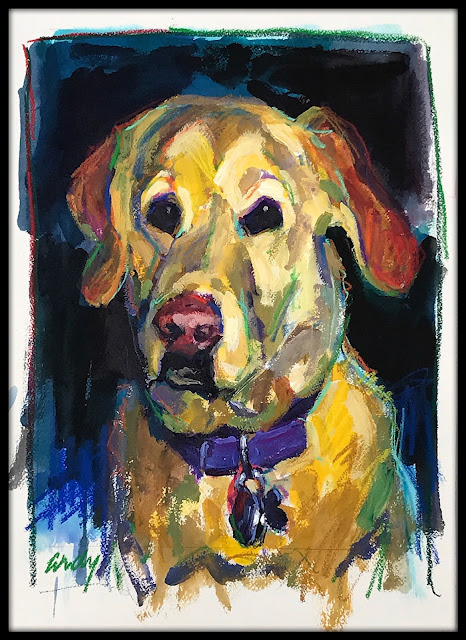 Oliver, Ollie, was naturally handsome. And, more importantly, naturally kind. Oliver. Family. Ever after with Ruby (Ruby Dooby) and Darby (Doo Doo) and dear old Dad - who loved them all.

We (all) don't enjoy Oliver's natural good looks. But there's no reason we (all) can't follow his model of kindness. Courage, sometimes, required. Captain Beefheart, who made music and painted, too, would surely not take exception.
Posted by A Colonel of Truth at 3:23 AM

Very nice Colonel. The dogs. Doing otherwise never entered my mind. I can't imagine even contemplating that. They are family. No Marine left behind and no dog left behind.

I know one of the Olivers of whom you speak, AWS classmate; recipient of the "Spring Butt Award," accepted in good faith. Served together a few times later on in our career. Handsome? Hard for another of the same gender to gauge, but a good man and and good Marine, yes, Fell on a sword for someone you and I loved and admired.

This is wonderful, Colonel. I am very grateful for my faithful pals, Dexter and Comet. Neither one has a military cut to their jib, but for this ol' Chief, they are my walking companions. Would NEVER leave them in an emergency, natural or otherwise. - and if you should get the chance, I'd love for your take on my blog, dogtown.blog....

Andy, I'm a sucker for your dog paintings and tributes. This is another beautiful one (post and the painting). And Oliver was beautiful in life and in art. Have you thought of a book of dog portraits in words and art?

As for those people who abandoned their pets leaving them penned or chained, I read yesterday this cruelty will be treated as a felony. I hope the law follows through.

I'm taking a poetry class and want to write a poem about my beloved Omar. Hard to do without crying. He was a beutiful soul and once a soul, always a soul eternally.