WE HAVE THE WATCH

WE HAVE THE WATCH
By Andy Weddington
Thursday, 27 December 2018

We come, not to mourn our dead soldiers, but to praise them. Francis A. Walker

During the last couple of years I know of six United States Navy Sailors returned to family for burial.

The Sailors, crew of the USS Oklahoma, killed in combat.

The disaster resulting from Japan's surprise attack, and science of the day, made identification of hundreds and hundreds of remains impossible.

America does not forget her battlefield fallen.

But identity is identity.

And identity is closure.

For the six, an admiral led the burial details.

Recently, my honor to attend two; small communities in Iowa.

And heeded the haunting advice of Thoreau, "Simplify. Simplify."

All to project the moving pictures into one powerful shot.

The shot that haunts.

The shot, "America does not forget her battlefield fallen."

A canvas that not longer satisfied set upon easel, upside down.

With big brushes it did not take long.

That, too, did not take long.

It's taken more than 50 years of painting to do that.

Christmas morning the painting - the one frame - gifted to that admiral.

Emotional; for sobering duty, for memories praising our battlefield fallen.

The admiral thought and said ...

"We Have The Watch" 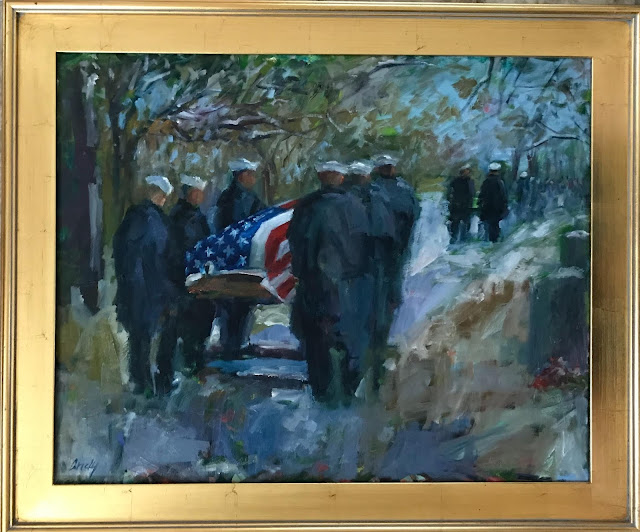 Thanks to both of you for honoring our fallen!

Nicely done, simple and to the heart of all who have buried a fallen brother or sister.