Sometimes by losing a battle you find a new way to win the war. Donald J. Trump, 45th President of the United States

Late yesterday afternoon in Virginia Beach a stop for gas. 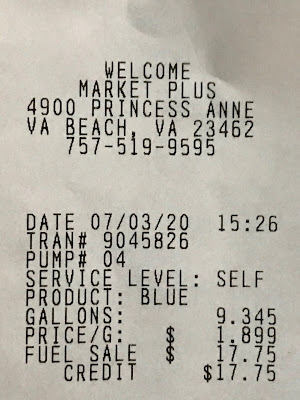 About 20 minutes later, sitting alone in a small chapel, a photograph - one of many on a loop - caught my attention.

So I waited for it to come around and took a photograph. 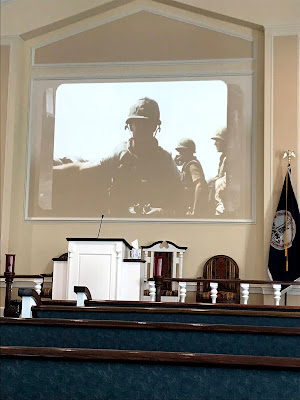 And about 15 minutes later an impromptu moment happened - for being alert I photographed it, too. 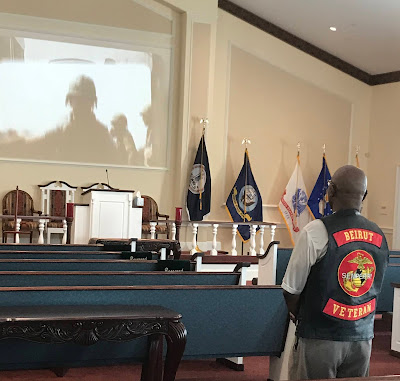 The man silhouetted on the screen, who happens to be white, is a Marine. The photograph dates back some 37 years.

The man standing in the foreground, who happens to be black, is a Marine. He served under the command of the Marine on the screen some 37 years ago.

I saw the Marine in the foreground watch the loop at least twice.

He wiped away tears at least twice that many times.

Moments later that Marine retreated to an adjacent room to sit and collect his thoughts.

I approached him and introduced myself.

And he told me about his five years active service - a recruit at Parris Island in the 2016 Series in 1982 followed by time as a mortar-man (0341) with Charlie Company, 1st Battalion 8th Marines, 2d Marine Division.

The two Marines were in Beirut, Lebanon on 23 October 1983 - the bombing of the headquarters building; 241 dead. Charlie Company was assigned a perimeter away from the building.

He told me Charlie Company was safe except for a few Marines, who for performance, had been rewarded with hot chow and a warm rack back in the headquarters building. He wiped away more tears.

We talked about the Marine on the screen.

And he remarked how the Marine Corps changed his life.

While the sun dropped rolling the highways south for several hours to home, I thought about the afternoon, grieving family, memories of a good man, and the serendipitous photograph of the two Marines; the significance, considering current events, not lost on me.

In essence, a Marine made time on a busy Friday afternoon preceding the 4th to pay respects to a brother Marine.

For the Red, White, and Blue.

The occasion was visitation for Brigadier General Christian B. Cowdrey, USMC.

On Tuesday morning, 19 February 1980 Captain Cowdrey was formally introduced as the Executive Officer for Charlie Company, 113 Officer Candidate Course. I was a candidate in second platoon. And remember him for example set the following 10 weeks; this is what a Marine officer is supposed to be. Twenty-two years later, a colonel, I reported to the Commanding General, Marine Corps Air Gound Task Force Training Command/Marine Corps Air Ground Combat Center, 29 Palms, CA for duty. Brigadier General Cowdrey was in command. We talked about the 113th. Four years later he retired me. It's a small Corps. And we stayed in touch thereafter; speaking for the last time about a month ago. Warrior til last breath.

To celebrate all who have sacrificed, paid the price - through selfless service, for America's independence - most recently on the easel ... 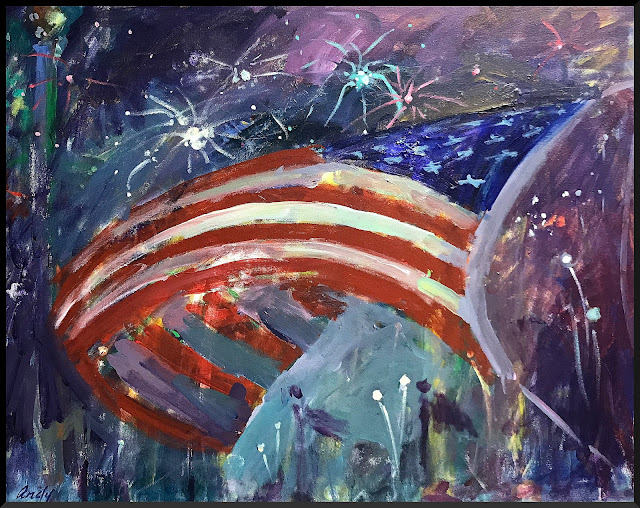 Love the sentiments and the flag painting. Have hung the one you did for me of the flags at half staff with the Lincoln Memorial in the background. All meaningful reminders of a unique country I was proud to serve and very proud to have served with you, Andy. Best wishes to both you and Linnea for a terrific 4th and beyond!

Thank you, General. Those were some great years at HQMC.