I've watched too many hours. Too many. And just walked away from the television to craft this short comment.

Wasted time, in some sense.

In politics, discovering truth is possible but improbable because no one earnestly wants to know (the truth).

Americans are busy. Most not having time nor patience to watch.

Cheap entertainment, however disheartening, would be randomly stopping pedestrians and querying as to what's going on.

Only for President Trump, the outsider who donates his salary back to America, has the (corrupt) deep state been exposed; there's panic, and should be.

So until November 2020, when the citizenry speaks, it's going to be annoyingly noisy.

This evening I hold faith in ...

General John Hyten, U. S. Air Force now America's Vice Chairman of the Joint Chiefs of Staff (prior to, Commander, United States Strategic Command) - neighbors for 2 1/2 years and I drove him to and fro the airport a few times.

Admiral Charles "Chas" Richard, U. S. Navy now Commander, United States Strategic Command (as of Monday morning past) - neighbors for a year or so and he drove me (and wife) to the airport at an early hour on a bitter cold, snowy morning.

Intellectual giants the two. More importantly, leaders; perfectly posted. They're Orwell's "rough men" and for them, their duties, sleep comes easily to me. And ought (to) to you.

President Trump, Commander-in-Chief - not neighbors, ever, but I saw Air Force One at the airport, and recently was surprised by a gift of a few White House and Air Force One goodies. 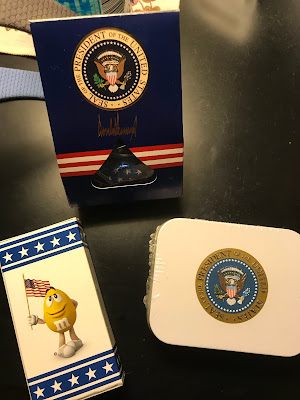 Keep the faith! Sagest advice ever penned me; seeing me through cruising times, and times of pure hell. And will these encouraging albeit flighty times, too. Hear! Hear!

Well put sir, as always. Unable to fathom with any logic what is going on in my country, not the same one we all faithfully served, some more than others, but all served. Don't know how you could have sat and watched the parade of scum appear before the committee of scared lunatics. While looking for something of use (an electric tool) I came across that Air Force LtCol testifying, paused because I though he might add some sanity to what I have been hearing from friends, but alas he was merely grand standing hoping to land a six figure job somewhere within the clan. Almost puked, had to close the browser thus losing my link to the tool. I am beside myself as to what is happening in this once proud nation. But, like you, I believe it will all be said, but surely not done, come November 2020. Must keep faith in the silent majority, if they are still out sitting patiently?? I pray they are!