Update: I am 26 days late posting this year for being busy with a move. U. S. Marine Corps Recruit Hurst died 36 years ago this date. About a year ago arrived message on LinkedIn from a stranger; female. She identified herself as the niece of (Recruit) Jerry Hurst. Somehow she had come across this commentary. She wrote to let me know Jerry's parents were now deceased and about how she remembered her Uncle Jerry. I mentioned somewhere in the Hurst home was a signed and numbered copy of 'MAKING MARINES' inscribed to the Hurst family. Searching, she found it. Jerry Hurst lives on in family history.

Even if momentarily, I've thought about Recruit Hurst - a 17 years old kid who made a man's decision to enlist in the U. S. Marine Corps - since his death.

"Shortly after reveille on the morning of 01 October 1983, Recruit Hurst collapsed in the vicinity of his rack in the squadbay. Despite immediate response from his fellow recruits, and heroic life-saving measures by his DIs and EMTs, Recruit Hurst died en route to the Naval Hospital. His death, coming at the end of First Phase, was a sobering experience for his platoon - 2095, DIs, and me - the Series Commander, all assigned to 2092 Series, Company F, Second Recruit Training Battalion, Recruit Training Regiment, Marine Corps Recruit Depot, Parris Island, South Carolina. We grieved, paid our respects in a fitting memorial service, accepted the reality of God's mysterious ways, and continued to move forward with training. Not a single day has passed since Recruit Hurst died that I have not thought about him, and his family. I still have the 2092 First Phase guidon." 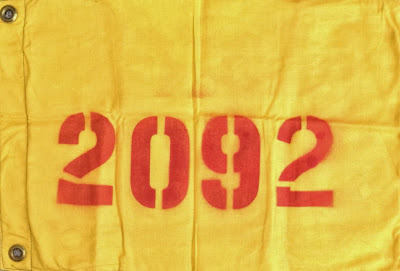 The Friday morning before on the battalion PT (physical training) field I'd run into Josh, a fellow series commander in brother Company D, and we'd decided to meet at the Officers' Club for a beer after the training day.

As agreed, Josh and I met for that beer; only one. We were busy and Saturday was just another training day with an early reveille.

A DI from platoon 2095 said, "Sir, good morning. The Senior told me to call you immediately - a recruit collapsed at reveille and it does not look good." [I will never forget that call - his business-like voice, the few words, and my racing thoughts.]

Shortly thereafter my battalion commander walked to our company area to see me. He asked how I was doing. I was fine - thinking about Recruit Hurst and completing a required report (Serious Incident Report that I still have a copy of - somewhere) but also about moving the Series to the rifle range (a life ended but training did not stop).

That CO reassured me deaths happen in recruit training - like lightning bolts. And he told me to focus on training saying he and the company commander would properly tend to Recruit Hurst. They, and others, did.

He was a trim and fit rather serious gent who sported a flat top and always looked a bit perturbed. Half-eye readers rested near the tip of his nose. He kept me standing. Open before him was the recruit training SOP (Standard Operating Procedure). First, he commented on the unfortunate death and reiterated what my battalion CO had said (they'd seen recruit deaths before).

Then for 20 minutes (seemed more an hour) he worked his way through and asked questions about the SOP; random they were with most related to the First Phase of training. Satisfied, he looked up and over his readers and said, "Lieutenant, now I'm able to confidently include a statement in my investigation that the Series Commander was knowledgeable and competent in the performance of his duties. You are dismissed."

I came to attention, said, "Good afternoon, Sir," executed 'about face' and returned to work.

A few years ago I had lunch with the Marine general who commanded the Depot in those days. I was stunned by his recollection of Recruit Hurst's death, and his involvement, unbeknownst to me, with the family (having made at least a couple of phone calls). He told me he'd seen a death investigation aboard our other recruit depot not handled so well and he was determined that would not happen again. It did not.

My DIs were doing everything right, to the letter and more importantly the spirit of the SOP and in line with their sworn pledge, to make Recruit Hurst a Marine.

A congenital heart defect not detected during his entry physical was determined as the cause of death. Higher Authority had other plans for Recruit Hurst.

"In memory of every recruit who dies during training - especially,

At age 26 I couldn't have imagined Recruit Hurst would cross my mind at least once a day. I've long accepted that's not going to change, and am grateful.

Thirty-five years. Goodness. The time. The memory as if yesterday.

Tonight a cold beer - with thoughts of Recruit Hurst; the men - recruits, DIs, Assistant Series Commander - of 2092 Series; Josh; the officers in my chain of command; and that MP.

Back in July, yet again, the men of those days rallied - some with ties to Recruit Hurst - at Parris Island. Another commitment made attendance impossible - 2020 is on the calendar.

My regimental commander from those days, the late Colonel Donald J. Myers, USMC, published a book - Pride and Discipline The Hallmarks of a United States Marine - in 2014. An honor it was when he asked me and another retired Marine from our time in the regiment to write an Introduction. He did not change a word. The current (as of today - 01 October 2018) regimental commander is using that book to help educate and train his DIs and officers.


After this commentary, now with minor edit, was first published a handful of years ago a reader helped locate the Hurst family. The numbered/signed copy of 'Making Marines' duly earmarked now in their hands (the effort to find the family Hurst took more than six years).

I received a lengthy and thoughtful letter about 'Making Marines' from a Marine general (retired) whom I do not know but commanded the Parris Island Depot after my days. A portion of his letter is worth sharing ...