"It is better to be alone than in bad company." George Washington

The words and particularly the painting resonated with many. "I want one!," responded some.

A Marine (too a SEAL) sent the link to an art curator - feeling they should be aware and perhaps interested.

A day later I spoke with the curator. They were moved by the simplicity yet power of the painting. And they kept looking at it and thinking about all it represented - some obvious, some not.

During our conversation the idea of words came up. Since finishing the painting I wend through countless, maybe mappable maybe not, neurological pathways searching for words, if any at all, to integrate into (above and below the decoration) and complement the painting.

Some words that came to mind and tinkered with: U. S. Marines; U. S. Marine Corps; Bleeding Heart; Battle Colors; Since 10 November 1775.

Though appropriate none right.

I toyed too with our emblem - eagle, globe, and anchor - superimposing a screened down, all sizes, hand-sketched version.

Though appropriate anything only Marine did not seem right - excluding soldiers, sailors, airmen, and coastguardsmen who've let blood.

Troubled, sleep had not been much. After a couple few hours every night since the painting I'd awaken to the problem. And lay wide awake until finally rising at a ridiculous hour to drink - coffee - and fiddle on searching for solution.

Friday night past no different. Lights out before 2100. Awake before midnight - thinking about the word problem. Dozed back off and a couple of hours later again awake. Damn.

Within minutes not hours sheets and covers traded for sweats. Coffee brewing while standing before easel in studio staring at the painting. Thinking.

On to the sitting room. Grabbed iPad - to check mail and peruse news whilst the word problem meandered on in brain circuitry but as background soft white noise.

Something caused me to check the website of an artist learned about a few months back and have occasionally stopped on his site.

He introduced the challenge by telling a bit about Ernest Hemingway - once challenged to write a story using only six words he penned, "For Sale: baby shoes. Never worn."

Now the challenge: An original painting - something seen or imagined - complemented with six handwritten words on the painting.

With coffee mug in hand off to studio. From easel ledge a broken stick of white compressed chalk grabbed and at the bottom of 'Bleeding Heart' hastily but neatly six words scribbled. 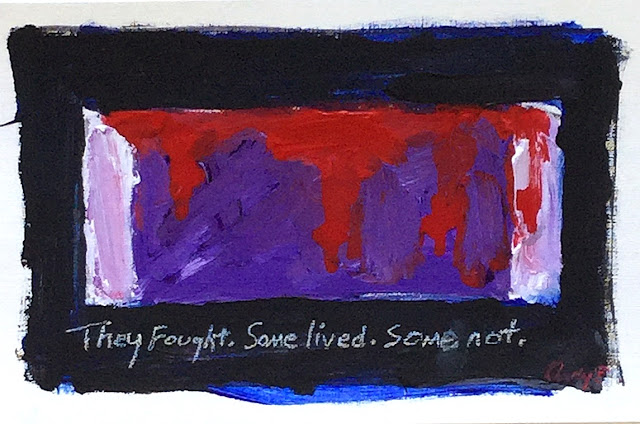 I photographed the now complete work. And submitted it to the contest - honoring Mr. Hemingway.

But more so honoring brother Marines on our 240th Birthday (yesterday) and all veterans on Veterans Day (today) - especially those who've let blood. For amongst them - good but bad (not in the evil but to be feared sense) - there is no better company; no one alone.  George Washington knew.

My intent is to paint a large oil, incorporating the six words (in paint with brush but as rendered in chalk), at least 3 x 6 feet.