"You can always count on Americans to do the right thing - after they've tried everything else." Winston Churchill


With current events, namely Americans being murdered at home and abroad and citizenry polarization over Syrian "refugees" being settled here, a basic question came to mind...

What is an American?

For that matter, any decent human being?


Trustworthy - in thought, word, and deed.

Loyal - to that which is right for to wrong is abetting.

Helpful - when opportunity presents; hand and cent, if you can.

Friendly - civility with warmth and smile.

Courteous - as expecting others to treat your loved ones.

Kind - others before self. 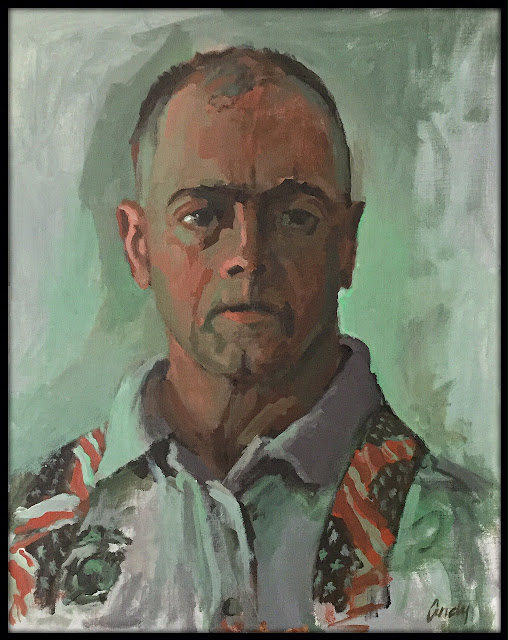 An American
Scout. Marine. Citizen.
Self-portrait - 20 x 16 in. acrylic on linen board

Honor - to do what is right; always.

Courage - not absence of but wherewithal to face and defeat fear.

Commitment - to that which is right.

Many Americans, many people, have lost their way - for first trying everything else.

Braille is an anagram of liberal. Which raises the obvious question, "Whom is blind - to truth, to reality?"

Yes, Mr. Churchill. So past time it is to reteach, demand, practice, and hold accountable society for doing the right thing - first. For a country and way of life is at stake. Second chances unlikely. And that's conservative perspective - truth and reality.

The first 12 traits learned as Boy Scout and closing three (core values) as Marine - not just complementary they are subsets of each other.

I would also include some values not mentioned, which are included in Davis Taylor's book, "The Imperfect Leader": Self-Discipline, Humility, Purpose-Driven, Gratitude, and Compassion.
Of those (inclusive) mentioned, Integrity and Humility are indispensable for a Values-Based Leader. Sadly, the only observable value our current C-in-C has demonstrated is purpose-driven. He is driven by his own ideological agenda, despite the adverse consequences to our Country.