More than four years running - government, media, technology, foreign and domestic enemies, et al., conspired to destroy one American citizen we the people elected to be our national representative - our President; to put America first.

He, masterfully wielding sword, proved innocent of all the crimes they charged and actually committed.

Though media censoring and suppressing, the people learning of massive fraud. Not speculation but evidence. Ongoing. Forthcoming.

Yesterday morning mulling over big picture numbers some research synthesized into one slide. 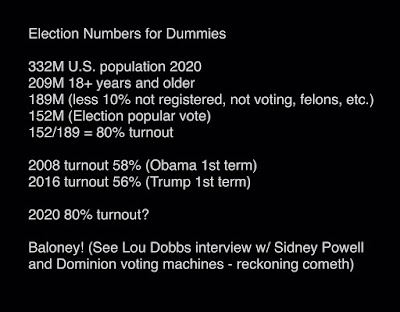 During the afternoon we entertained.

While touring studio the below recent painting ( 30 x 30 in. acrylic on canvas) again caught my attention. There's more to it than initially meets the eye. Look and see. Closely. Hint: Think mental, metal, medal. 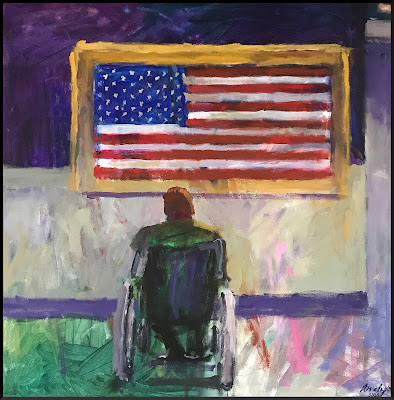 For rest of the day, on mind.

Then last night came note, " ... there is so much said in this painting!"

Yes, and more than she likely knows.

With smooth jazz in the background while reading and watching more about the massive fraud, a word to mind.

Over coffee a simple way to portray the two 'C' words of massive fraud occurred. 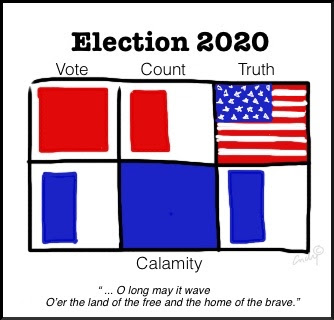 The vast majority of Americans, political ideology aside, want liberty - safety for self and family, honest and meaningful work and purpose, and freedom to go about life.

So there's no logical reason to believe the election split down party lines.

And certainly not the impossible numbers reported.

There's an enormous force of we the people patiently waiting; making presence known and voice heard - not leaving path of destruction and harm.

But if for keeping faith truth and justice does not prevail, stand by.

God is on their side and the smell of calm before the storm fills the turbulent air.

Rest assured, all, our flag will still be there!

Count on it; for the likes of patriots in that (wheel)chair.