My doctor told me to stop having intimate dinners for four. Unless there are three other people. Orson Welles 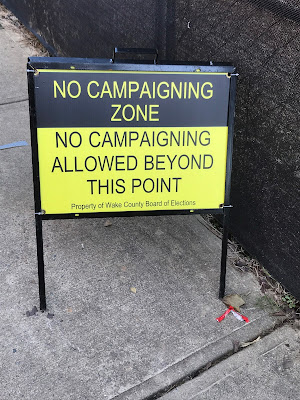 What caught my attention was the last line of fine print: Property of Wake County Board of Elections
Board of Elections.
I was bored.
Fond of words, language, plays on words, etc., and because my parents 'played the radio and turned the record player on at night so as a kid I could hear more words' (as Joe Biden suggested a good idea - my parents were way out in front on this), a twist relevant to a current event occurred to me.
Jeffrey Toobin's now infamous ZOOM call.
As reported, the multiple persons video meeting was some sort of post election strategy session.
Might Toobin have misheard Board of Elections?
Bored of Erections?
Then disagreeing took (the) matter into his own hand to prove his co-strategists wrong?
For Pete(r)'s sake!
Jerk. Off he thought machine.
Anyway, private chuckle. Then off I stepped to take hold of a ballot.
Sticker adorned sweatshirt proved duty done. 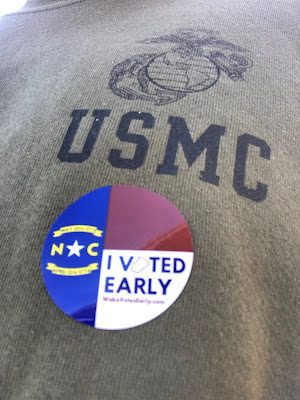 Some 90 minutes later Rush Limbaugh opined about Jeffrey Toobin's masterful handling of the ZOOM call.
In the background, Michael Jackson's 'Beat It.'
No kidding. El Rushbo, Stage 4 lung cancer or not, at the top of his game.
Then, after lunch, a sidewalk stroll through the small, charming downtown was this sign ... 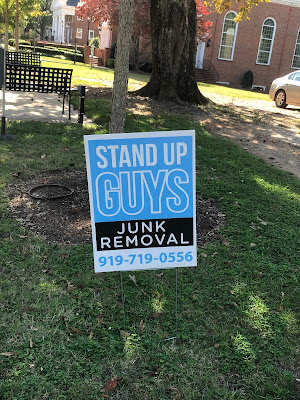 And yet another twist, a hypothetical phone conversation, came to mind.

"Good Afternoon, thanks for calling Stand Up Guys. Fred speaking. How may we handle your junk?"

Then we got in the car parked only a few yards ahead and zoomed away; laughing.

Reality; a big dose of.

Noted these past months is the teleprompter support at every Biden appearance.

Enormous screens so he can read - short "speeches" and answers to canned questions - from afar.

With lots of experience, that is crystal clear.

From things he has said, and not been able to say, it's also clear he is not able to encode (new information).

That is, a consequence of the disease, he cannot retain new information.

What does that mean?

Simply, short-term memory is kaput; measured in minutes if not seconds.

With the impact on adding to long-term memory obvious.

Certainly family close to him know and so does everyone working the campaign know.

His condition incurable, nonlinear, and progressive.

Bluntly, the Biden campaign and media is presenting a lie to the country and world.

Elected or not, know Joe Biden will not be in the public eye after the election.

To close with nonpartisan fair warning ...

As to the Hunter Biden brouhaha, pay close attention (to language).

Not one Biden denies the laptop belongs to Hunter.

And, as reported, the FBI being in possession of the laptop must not lead anyone to assume the FBI will aggressively investigate and pursue criminal justice against Hunter or Joe.

Apparently, Hunter, like Toobin, is not bored of erections.

There's still Board of Elections - for a little while, anyway.

America, what a country!