WHAT IN TARNATION IS THE COMMANDANT OF THE MARINE CORPS THINKING?

WHAT IN TARNATION IS THE COMMANDANT OF THE MARINE CORPS THINKING?

Marines - some brilliant, some brawny, some both - made me (ever questioning own brains and brawn) a better Marine.

Whether realized or not, I think of them every single day.

My god, how fortunate to serve alongside them - without peer!

I was especially fond of Marines who spoke their mind, because I was one of them.

Subordinate, peer, or senior mattered not - I was polite, always respectful, but blunt as to preclude any misunderstanding whatsoever to doing what was right; per integrity, courage, Semper Fidelis, too.

Undoubtedly, there were Marines, subordinate, peer, senior alike, who did not appreciate my candor but could not credibly argue against logic and, most importantly, right. Sometimes right is uncomfortable. Sometimes painful. Never harmful.

To any suffering (I) incurred, I do not know.

Now, to the matter at hand, the thinking of our commandant.

A polite, respectful, but blunt solicited (as noted in public articles on topic) comment.

Too, I have heard General Berger discuss and answer questions about Force Design 2030 during radio interview. He is passionate and eloquent. Salesmanship matters (ask any successful salesman closing a deal on train cars of new and improved snow to Eskimos in the dead of winter [snowflakes, not meant as ethnic slight]).

And I have read - from exceptionally thoughtful objective painstaking detailed analysis by Marines blessed intellectuals to emotionally charged colorful tirades from juniors to seniors that would make any salty Marine momentarily blush - Marines et al., response to Force Design 2030.

Last week another article and the author stated our commandant needed and was soliciting help from the field.

Still feeling sense of duty, despite being swamped with life and taxing family obligations atop everything else any Marine retiree enjoys, I started thinking more about it.

If that summary is incorrect Marines will set me straight.

And the last part of the summary, the females, is the 'what in tarnation is the commandant of the Marine Corps thinking?'

General Barrow, during sworn testimony about women in combat before the Senate Armed Services Committee in June 1991 (8 years after he retired), said with a balance of disgust and sarcasm (though not insulting), "If you want to make a combat unit ineffective, assign some women to it."

And General Barrow went on, drawing from personal experiences, to make his compelling case. 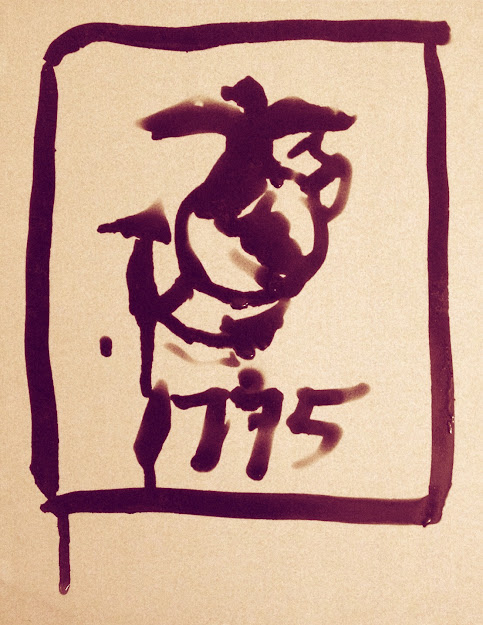 The Corps
sketched on Buddha Board

Regrettably, Verle, a resident of 29 Palms, California died two years before I reported to the Combat Center for duty.

But I met and befriended his late widow, GeneCarolyn. Gene, 35+ years my senior, was a friend and my informal date (because my wife was deployed to Afghanistan) to the 2012 Marine Corps Birthday Ball aboard the Combat Center, 29 Palms. She was a lot of fun!

Verle was a Marine infantryman. He commanded rifle units in World War II, Korea, and Vietnam. That is, he saw plenty of combat.

This morning a sentence on page 50 - germane to the present - stopped me cold.

The timeframe is post World War I, the Marines victorious at Belleau Wood, and Grandmother Smallwood, with young lad in tow, in Paris is schooling a foul-mouthed U. S. Army captain, readying to lead an artillery battery in a parade, for his gratuitous profanity and disparaging comments about Marines ...

" ... If there is a requirement, sir, to be a bear, then you had better be a grizzly. What the Marines said to the Germans sir - and with fearful loss of life and limb - was: 'Your attack stops here.' Only the infantry can't pass the buck, because there is no place else for it to go. The infantry always has to say: 'The buck stops here.' You'd do well to remember that captain."

I served with many a fine female Marine. Superb Marines. But nary a one a grizzly.

As General Berger came to Force Design 2030 in part by way of wargaming, has he not duty to reveal the wargaming (and whatever algorithms) that foretells how gender integrated entry-level training to the platoon level and more women in ground combat units, notably infantry, will strengthen combat effectiveness and efficiency in a smaller, leaner force?

Especially since a nearly year long field study (not quite exhaustive for not assessing all-female units) conducted a handful of years ago, proved degradation of combat capabilities.

To close, going back to being polite but blunt, and respectful, whatever politics be damned and moot, with integrity, courage, and Semper Fidelis weighing heavy on mind, for our Commandant ...

"General Berger, sir, truthfully, what in tarnation are you thinking?

Considering a combat unit ought to be the baddest thing roaming Mother Earth, respected by friends while terrifying to foes, for maximizing odds of mission success and survival ...

How do you suppose your sales pitch for Force Design 2030, that gender integrated training, and more women in ground combat units would go, face-to-face, with Major General George Barnett, 12th Commandant (World War I), and General Wilson and General Barrow, and Verle Ludwig and Grandmother Smallwood (mother of Archie, a Marine)?"

Of course, all said presumes the requirement for warfighting is still a bear - grizzly; not koala, panda, nor teddy.

Well said Andy, you are much more elegant and polite than I in my blog. But then that's me. The one who lived by the mantra, "If you cannot handle the question, please sir do not ask it" I believe CMC Berger is part of the "gang."

Thank you, Jim. In all things be a gentleman. Sometimes I fail.

Gender integration in the US Marine Corps is required by law!

The 2020 National Defense Authorization Act, signed by President Donald J. Trump in December 2019, (after Mattis and Kelly had departed) is an act which was voted yea by every Republican in the US Senate. So write your Senator! Overall 88-11 if I recall. To be fair it was about Defense budget appropriations not gender integration. It was slipped in. The other services have already complied, I believe. It requires gender integration down to platoon level at the recruit depots. The Act allows MCRD PI five years to comply and San Diego eight years to integrate the recruit platoons...San Diego was allowed more time as that Depot needed to assess construction needs and make any necessary changes. So the CMC is obeying the law.

Law noted. Known. Bigger issue. And just sitting CMC. But the guy in the seat inherits. They all work for we the people; at least for now.

As an "03" Platoon Commande of a Rifle Platoon, XO and CO of a Rifle Company in Vietnam I just shake my head and mutter "You gotta be kidding me."r

I had the pleasure of serving with your wife during that 2012 deployment; a most excellent officer!

As to the question of what in tarnation is the commandant thinking, like too many of today's flag officers he wants history to show him as pushing for transformation more so than for retaining a combat effective force. For some reason, these flag officers don't think we'll ever be in a hand-to-hand-fight level of war again.

As a former sailor who served with females during Desert Storm, what he is thinking is what sailors have known for DECADES, that females have the ability to do the jobs that were formerly "male only", this includes combat arms. I know plenty of females who have been on the front lines of operations both in Iraq and Afghanistan along with the person gulf platforms that Navy SEALS and other SF groups used. Also look at pretty much every other nation in existence, but especially Israel, where females are on the front lines every single day, and perform superbly.

Are you of the opinion that the US Marine Corps have a problem achieving the same results as the Israeli Army? If so,why is that? The females I served with during Desert Storm, ran rings around a lot of the male weapons types in the same division, because they knew they had to show they could handle it EVERY SINGLE DAY.

Give this new generation of Warfighters a chance.....they won't let us down

Jon Tessler,
First, appreciate your civil submission with ownership thereof. Some emotional readers find themselves unable to comply with forum rules and thus submissions deleted; though some so silly and colorful they merit public commentary (response) of their own. And thank you for service to country.
The topic has more concerning a variable than you address. And never mind the obvious, “Why is there not all women infantry divisions?” “Or all women artillery regiments?”
Link germane: https://www.cmrlink.org/ Read the featured article. If that’s not enough watch General Robert H. Barrow’s (27th Commandant of the Marine Corps and ground combat in three wars) sworn testimony before the SASC in 1991 on the topic women in combat.
Not that it matters anymore other than knowing the life, I was an infantryman. I happen to be married to a retired Sailor (female) who got just a taste of the ground combatant’s duties while forward deployed and she is of the mind women do not have a place in ground combat.
Finally, training is as concerning if not more so - for some never see combat but dangerous, demanding training is a certainty for all and unforgiving.