We're going right down the toilet, and it's a made-in-China toilet. Peter Navarro

Anymore I watch morning news during coffee, the Corona Virus Task Force evening update (the first half hour or so, anyway - I wish President Trump would report and depart but he just can't help himself; banter and repetition painful), and maybe something non-fiction (preferably related to nature or animals) for an hour or so before early Taps.

Just a bit late, by any standard.

Nothing like being decisive when there's but one choice.

Considering the circumstances, shamed into is the only explanation. And that fits.

Funny. But not really.

Prior to the announcement I presumed Barack Obama dead (or at least battling the virus).

Fair enough as not much lingers as reminder.

And from Joe Biden's public appearances he seems pretty much dead.

Funny. But not really.

And unlike some fortunate to recover from the nasty Corona virus, Biden is not going to get better.

Dementia and Alzheimer's go one way down the deteriorating road.

At this point, Biden would be best served to just don a mask; especially before speaking. And mumble.

But whatever team Biden and the Democrat Party strategy, media is doing America a disservice by at least not snickering with complementary eye roll during reports of Biden as candidate for president.

No wonder media have not credibility.

And another thing about media ...

They, all of them, have adopted an annoying catchphrase.

Another sort of virus it is.

They ask of whomever the "expert."

This morning one anchor of a major morning program used it at least three times in less than 15 minutes. Ditto his cohorts. Do they realize what they're saying?

Of course the expert is eager to forecast.

They're being asked to predict the future.

The honest answer is, though phrased a question, a statement, "How the hell should I know?"

That's what I want to hear, "How the hell should I know!"

A word plague. A thought plague.

By the way, Chinese wet markets the virus source?

Now what is the world going to do about it?

No expert but I have an idea. It has something to do with toilets.

But with that I'm going back out into our wonderful community, under construction, to paint watercolors of bright yellow (unsure if made-in-China) portable toilets - an appropriate and favored subject recently.

Far as I know, they've not been raided for the treasured rolls. Most likely for being under 24/7 surveillance; life these days in our beloved United States. Then again raiders, to not look out of place,  could always mask. 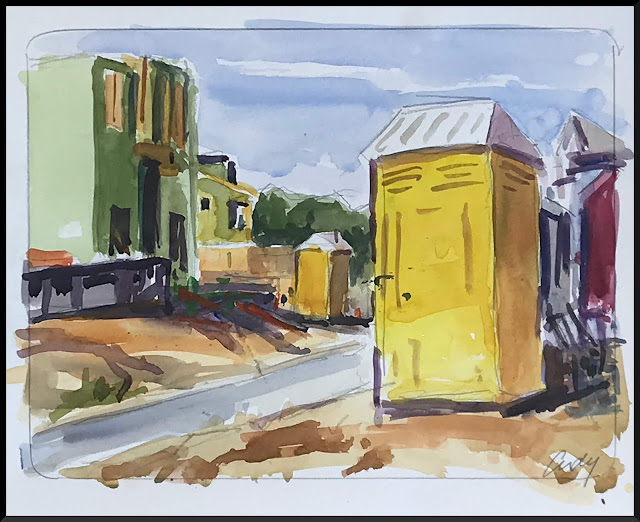 Another good one Col. The truth needs to come out about COVID and we’d better do something and the world needs to get answers.