WHAT THE HECK HAPPENED IN VEGAS

WHAT THE HECK HAPPENED IN VEGAS
By Andy Weddington
Thursday, 20 February 2020


Truth will ultimately prevail where there is pains to bring it to light. George Washington


Last evening the self-proclaimed party of youth, vigor, and diversity - Democrats - marched six white, but one not old, people onto the debate stage in sin city.

In short, the newbie, a bitter and bombastic billionaire took a slot flanking an integrity-challenged Indian, a cranky communist, a goofy gaffer, a youthful cross between Wally Cleaver and Alfred E. Neuman, and a woman who eats salad with her comb.

All off the rails.

If a betting man, don't.

To and fro ninety minutes of debate to Trump rally was enough.

Over morning coffee and reflecting on daily life these past few years in small town America in contrast to last evening's banter between a gaggle that wants to be President and our President a conclusion: America, as Democrats and media drum beat, is not divided.

Washington is our problem.

And media, in the advocacy and campaigning business, exasperates our problem.

But objectivity flows through the citizenry.

Have you noticed the increasing number of once loyal Democrats sickened, leaving the party, and supporting President Trump?

Have you noticed the essence of the argument is free will preservation versus free stuff propaganda?

And that a fracture not division.

How many on last night's stage (do you believe) now, or will vow to, follow President Trump's lead by giving salary back to we free people?

Free people are not easily fooled; for brain and logical train of thought. 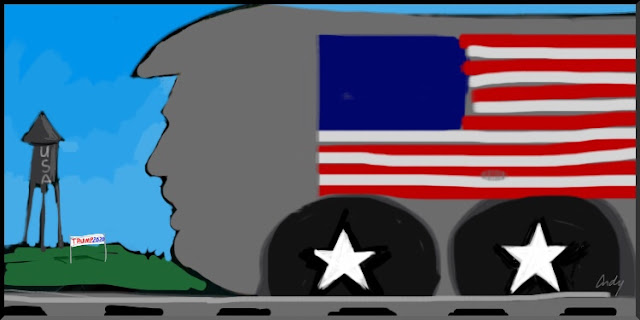 Much to my better judgement, I watched the entire episode. Don't know about the rest of the country, but we here in FL are flooded, and I do mean flooded with Bloomberg's ads. Every and I do mean every station break, with very few exceptions, has one of his ads. I assume he thinks the transplanted New Yorkers living full time down here will vote for him. Heck, I don't know, maybe they will, but I have my doubts. Anyway, I digress, because of his ads I wanted to see how he did up against the horde of nut cases. My first laugh was to see where they positioned him on stage, at the end nearest to another short person, but with one of the two with the biggest mouths. Can you imagine what it would have been like had he been in the middle between Bernie and Biden? Wow! What a parade of clowns. Mikey really did not show well, I thought he'd do much better, but he took a shot in the bow last night. Saw a cartoon someone sent me this week of Biden saying he lost in Iowa to an old Communist, a gay guy, and a fake Indian, nothing like getting your butt kicked by the "Village People". That is an appropriate name for this whole group. Needless to say, I'm glad I watched