In the late 1950's my parents, an active duty Air Force family, assigned to Presque Isle Air Force Base, Maine, welcomed their third son. I was just shy of three. And another brother was but 14 months. Maine is vivid in memory - deep snow, bundled up against the cold, and fishing with my dad; riding atop his shoulders as he waded across a shallow river to reach a favored tiny island.

Some twenty miles or so north of Presque Isle another active duty Air Force family, assigned to Loring Air Force Base, Maine, welcomed a son. They named him Bret.

That the Weddington family and Schomaker family were practically neighbors, though did not meet, all those years ago only came to light Friday past, 31 January, in conversation with Bret's dad; who retired from the Air Force.

Fast forward about 20 years, Bret and I, yet to meet, were commissioned Marine second lieutenants.

Infantry officers, it would be another four years before our paths crossed - for duty in F Company, Second Recruit Training Battalion, Recruit Training Regiment, Marine Corps Recruit Depot, Parris Island, South Carolina. Bret reported about a year after me.

I was a bachelor living in a "luxury" apartment complex in quaint Port Royal. The Schomaker family - Bret, wife, and young daughter awaiting base housing - moved into the apartment above me.

As our time in the battalion wound down, Bret and I were privileged to be commanding officers of the two training companies - D and F. Bret led F Company; our mutual roots for learning the demanding duties of leading the men - Drill Instructors - who make Marines.

After Parris Island we went different directions. Our paths not to cross again until years after we'd both retired. This commentary had something to do with that. Someone had forwarded to Bret commentary written about the 23 October 1983 Beirut bombing (mention of the death of a mutual friend, First Lieutenant Scotty Sommerhof, USMC, caught Bret's attention). He sent a note and we corresponded regularly thereafter.

Most recently, we visited twice in Nebraska. Once when he was in the Omaha area to tend to the cleaning of family grave sites. And he and his wife came to my wife's retirement ceremony in September. We have photographs.

As in past years after publishing my annual 23 October commentary, arrived email from Bret remembering Scotty.

On Wednesday morning 22 January a private message on Facebook asked I please call a number. I recognized the name but not the number. The brevity of the message seemed odd and likely a scam. Please confirm identity by answering this question, I replied.

The woman, the sweet little Schomaker girl who lived above me for six months at Parris Island and I hold dear in memory for her tap dancing down the hall, was distraught.

Her dad died at home unexpectedly that morning.

In good health and training to run the upcoming Marine Corps with his daughter, God had other plans for Major Bret Schomaker.

During the service for Bret, Pastor Jim Baxter of New Hope Presbyterian Church cited a Billy Graham quote (he amended from 19th century preacher and evangelist Dwight L. Moody), "Someday you will read or hear that Billy Graham is dead. Don't you believe a word of it. I shall be more alive than I am now. I will just have changed my address. I will have gone into the presence of God."

Sitting in that pew, reflecting on 36 years of friendship, and that Heaven's Gates are guarded by Marines, what came to mind was Bret's new address: MajorBretSchomakerUSMC@Heaven.Gate.

Per his wishes, tomorrow morning Bret will be interred - Jefferson Barracks National Cemetery, St. Louis, Missouri. Marines will tend to their brother. 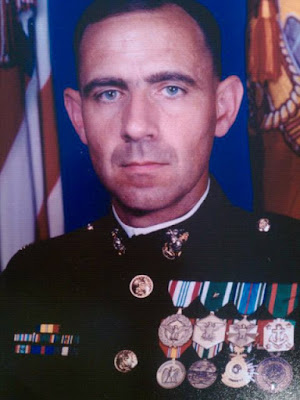 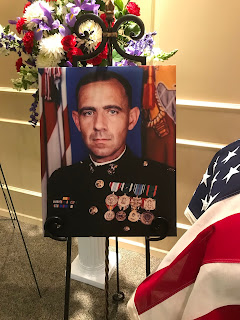 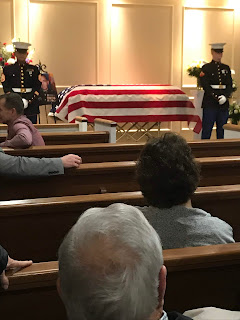 As Marines know all to well, despite the heartache of loss there's but one thing for we who survive to do ... Forward, March!

F Company Marines and families will reunite, as we have every two years for more than a decade, at Parris Island in August.

We'll raise a glass to honor another fallen brother.

In closing,  Jim Lehrer died the day after Bret. Once strangers, the Marines have surely met having something in common - Kansas; Jim was born there, Bret died there.

Semper Fidelis.
Posted by A Colonel of Truth at 6:58 AM

He'd be nodding in approval.

As always, well said my friend!