Guard against the impostures of pretended patriotism. George Washington

From the Nebraska border it's a straight shot of less than three hours rolling along state highway 34 to Chariton, Iowa.

Chariton, established mid-19th Century, is a charming small town of less than four square miles located about 50 or so miles slightly southeast of Des Moines.

And about 3% of them, one a horn blower, turned out Monday past for the Memorial Day ceremony at the Lucas County Veterans Memorial Park. 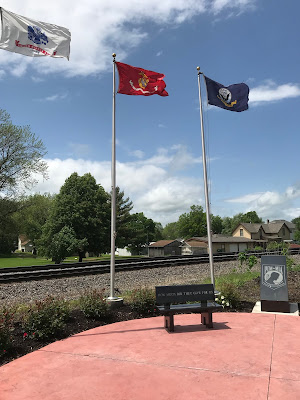 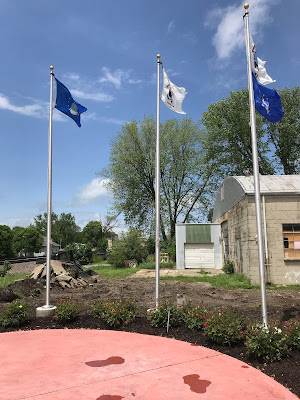 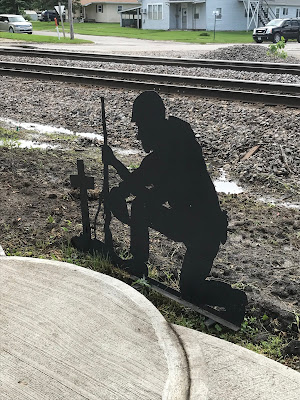 Lucas County has lost 250 citizens in battle. Most during the Civil War. Her latest casualty in Somalia. Their names engraved in polished granite. 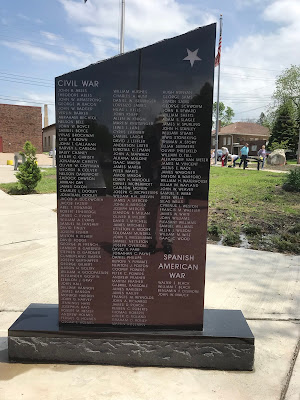 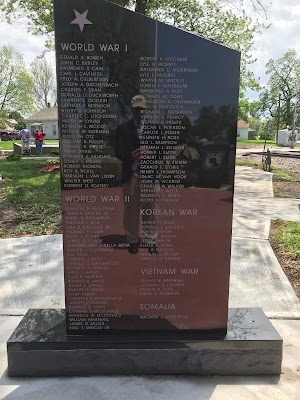 A Navy admiral from Nebraska sailed, aboard a CRV, into town.

Too came a Navy Color Guard. 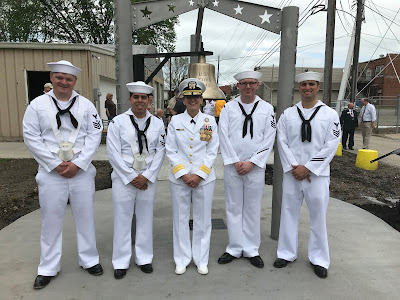 Fitting because the town, by the hand of a local 95 years old retired senior chief petty officer, was ringing to life a replica bell of that aboard the USS Iowa battleship. 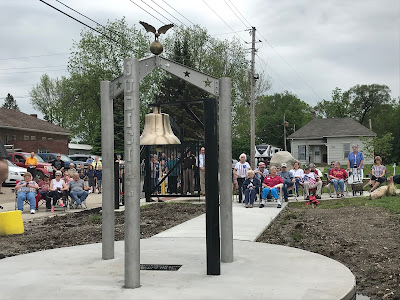 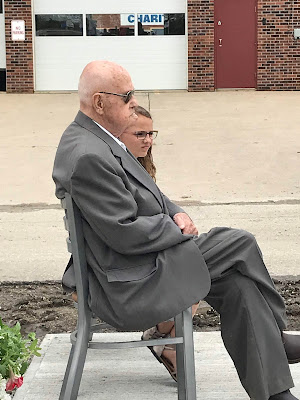 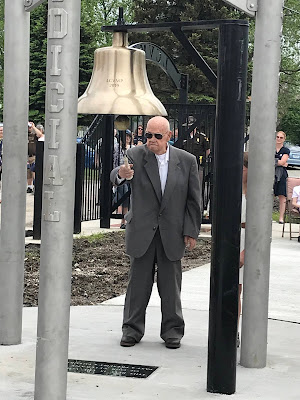 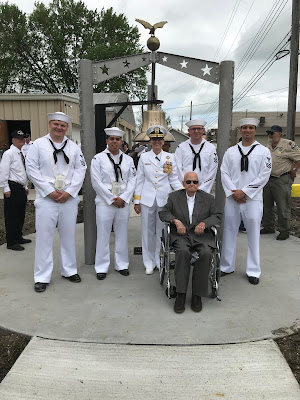 The Park, in its infancy still under thoughtful design, is atop the ground where the town once held her misbehaving citizens - the jail. The retired Marine spearheading the project chuckled at the irony when he told of the history. 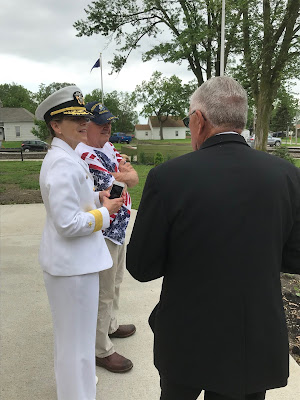 A busy railroad line runs within yards of the Park border. A train passed just after the ceremony and the engineer blared the piercing horn when passing through the arms-down, lights-flashing crossing. The prisoners came to mind. 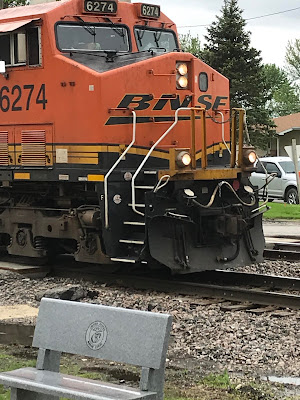 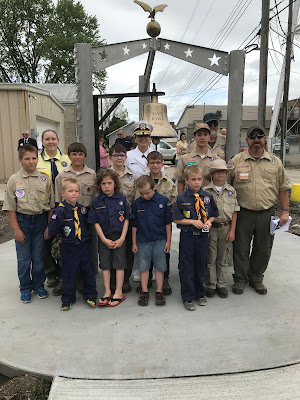 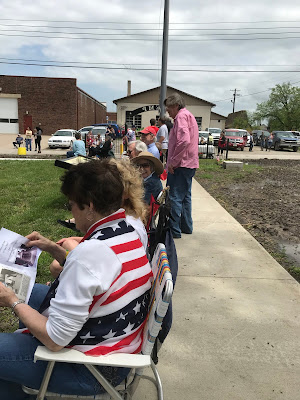 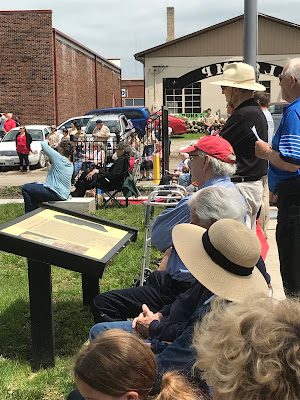 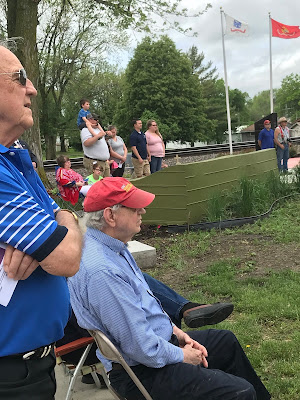 There were plenty of youngsters and parents walked them around the small purposely meandering Park teaching them about the sundry markers and monuments. 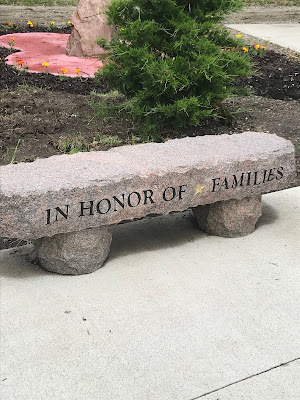 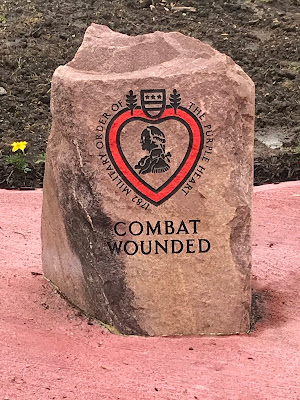 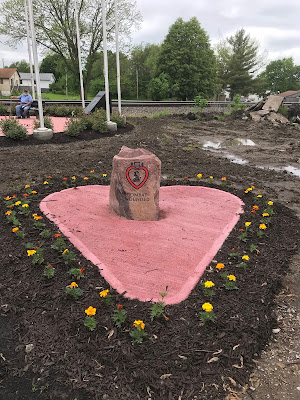 A seven-man firing detail of veterans, that spanned three generations, formed along the back walkway. 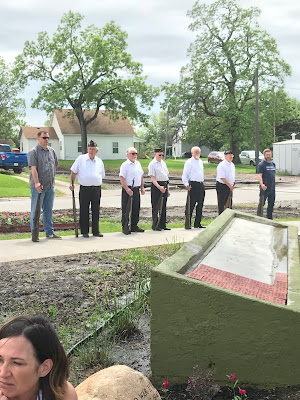 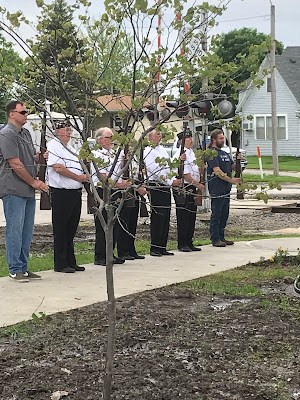 The program, led by the Park's Marine volunteer, followed the boilerplate for such ceremonies - welcome, invocation, post the colors, introduction of guest speaker ...

Standing in the crowd, I listened while the admiral spoke about 10 minutes of good, heartfelt, mindful words.

The crowd engaged. A baby cried. Some old men and women shed tears. Cried, too.

The horn blower, forward and to my port encircled by the service flags, caught my attention. I snapped a photo before the first note.

If the high school girl felt any pressure her performance did not betray - she sounded one of the loveliest renditions I've heard. Clean. Calming. But chilling, too. Hooray! for she the horn blower. 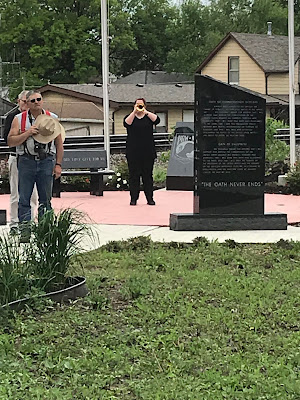 The Sailors posed for photos, and talked to the folks they selflessly defend.

Some in attendance lingered in the Park. Others walked across the street to the VFW Quonset hut for home-baked goods and coffee and bug juice. The sounds of children.

In the hut a shadow box caught my eye. 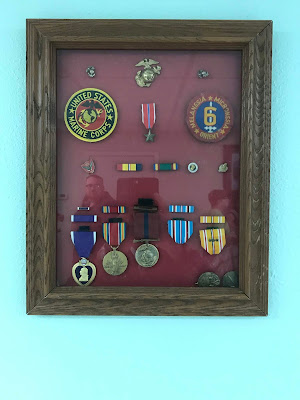 The Marine not identified. The display haphazard with combat action ribbon backwards. Purple Heart. Retired lapel pin. A Marine honored but not put together by his (or her) hands.

Farewells to our hosts.

Westbound on highway 34 the afternoon replayed.

Home, relaxing, and perusing the photos one stuck out: The horn blower.

But it was not the girl with trumpet that caught my eye.

In the frame was captured a gentleman.

He doffed his hat. 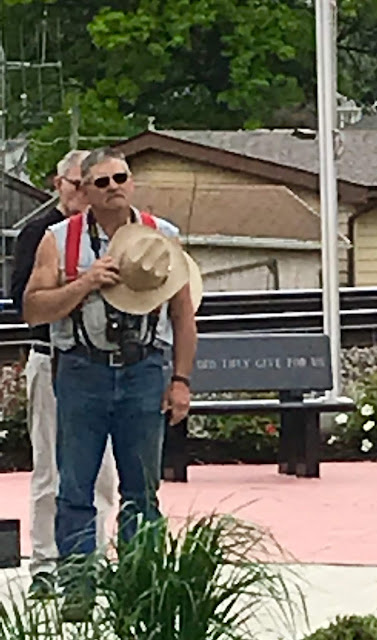 I'd not noticed him when taking the hasty photograph.

I know not if Marine. Or if veteran.

I know he's a patriot (for the crowd was not prompted to so behave).

There is something stirring about his body language, about the tilt of his head.

So stands a man who understands and loves country and colors and respects the sacrifices of his fellow man.

Do not mistake their quiet way for void of resolve.

The names of 250 preserved in granite. Theirs stand ready.

If ever in Iowa rolling along 34 make it a point to visit the Lucas County Veterans Memorial Park in Chariton - maintained by volunteers and the generosity of donations. You'll be welcomed by defenders of patriotism. And rewarded.