The supreme art of war is to subdue the enemy without fighting. Sun Tzu

The MARG spent Christmas (and New Years) in ports along the coast of Spain.

The amphibious assault ship USS Saipan - LHA-2 - was home to the Marines and Sailors of Golf Company, 2/6; an element of the business end of the spear.

Our Christmas tree was a chunk of lava rock from Oman; with things Marine - e.g., C-rat cans; brass; etc. - as ornaments. The topper, as I recall, a cheap plastic translucent Santa on a spring. Somewhere there's a photo.

The Cold War was on.

We, America's big stick, showed our flag and sometimes powerful capabilities; to reassure friends and give enemies pause.

Men away from home.

That it Christmas moot.

This morning was text from a retired Marine infantryman friend who, too, forward-deployed in those days. He sent along news about a new documentary in tribute to the heroes of World War I.

War and heroes is redundant, I think.

Old black and white footage has been colorized, modernized to speed, and spliced to give us a feel for the men and their ordeal.

Peter Jackson's stunning work is titled 'They Shall Not Grow Old.' Clearly, a film every America should see.

Watching the seconds short of 2 and half minutes trailer one thought ...

The best of man steps forward to face the worst of man. 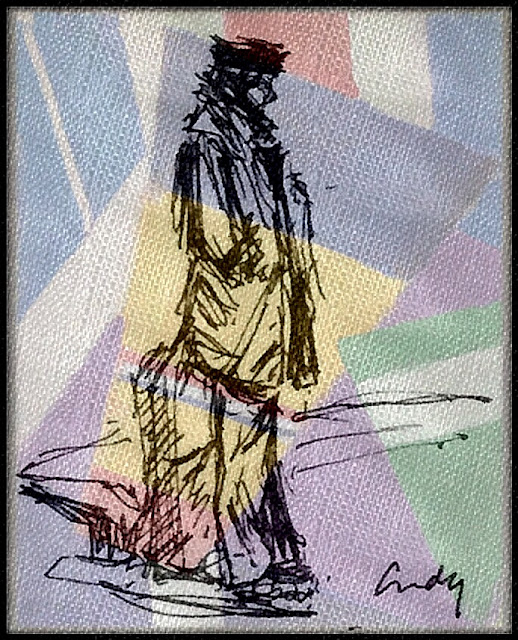 There was mention of 15 and 16-years olds taking that step forward.

My great-grandfather (whose middle name I carry and whom is a fuzzy memory) was a soldier, a corporal, during World War I.

Particulars of his service unknown, regrettably.

My grandfather (not veteran) and father (veteran) who also carry the middle name, both deceased, never spoke about the elder's service. [A great uncle, when a teenage kid and Army private, landed on Omaha Beach on D-Day, World War II. He fought to the end. He never spoke about it to me.]

All I have of great-grandfather is a copied black and white photograph of him (in uniform age unknown) merged into a composite with his beautiful bride. Some say family resemblance undeniable.

All home for many a Christmas now.

So we pause to reflect, to think, to quietly thank those past and present men, and women, who took that step forward; especially those forward-deployed - to reassure friends and give enemies pause.

For them we grow old. Maybe youth shall.

Cold war is. The worst of man. The best of man face it.