The patriot's blood is the seed of freedom's tree. Thomas Campbell

Couple weeks ago arrived in the mail, courtesy of an aunt, a book not known to me; though first published in 2009.

And like most books after last word read I've been digesting and reflecting.

It was an education.

Every American, starting age 16 or so, should read it. Those now beyond that tender age, regardless the years, ought to read it.

To the book momentarily.

During the time frame June 1996-June 1998, while assigned to Headquarters, U. S. Marine Corps and working in the Navy Annex across from the Pentagon, the sights and sounds - sometimes early morning, sometimes late afternoon - of mourning marches calmed.

Mourning marches, I called them.

Along the paths of Arlington National Cemetery ceremonial details crept.

Our nation's best honored and laid to rest. 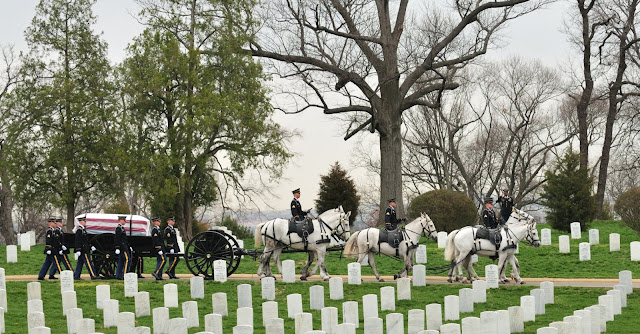 I painted a couple of scenes (though unable to quickly lay hands on the images of the sold works) .

But little did I really know, though walking a time or two or three, about that hallowed ground.

In his terrific book 'On Hallowed Ground - The Story of Arlington National Cemetery' Mr. Poole traces the cemetery's history - from interesting macro to intimate micro of those at eternal rest.

Reverence keeps occurring to me as the right descriptor for the powerful story.

An element throughout is the periodic need to expand the grounds; for wars and dead is a fact of life.

To point, that Navy Annex, positioned across from the cemetery, is no more.

Years ago razed for fallen sons and daughters more.

Not just growth but rules, too, as to whom can be duly honored with plot have evolved.

Not all who've answered country call so merit.

Yet is there not bond amongst veterans one and all?

Yesterday I thought about the recent funeral of Petty Officer Second Class George C. Ford (1916-1941) in a small Iowa community I was honored to attend.

Petty Officer Ford, a fireman, was only recently identified amongst the hundreds and hundreds of lost crew of the USS Oklahoma sank in Pearl Harbor by the Japanese on 07 December soon to be 77 years ago.

He qualified to be buried in Arlington.

Family chose to keep him home.

He rests amongst brothers and sisters in arms.

But as to tradition and symbolism of honoring our veteran dead who either do not meet requirements or chose not Arlington why not a bit of Arlington hallowed ground to them?

Why not a small measure - perhaps no more than necessary to fill an expended small arms casing - of Arlington hallowed ground sent, to wherever a veteran is to rest, for ceremonial sprinkling upon the grave?

Might Congress, as it has with ideas debated and put into practice, consider and enact as tradition?

Never will you see nor feel Arlington National Cemetery the same, after Mr. Poole's sobering and haunting tale.

Well said my friend and brother. During my tour at The Barracks, I spent many days in Arlington laying to rest brothers, some I knew personalty, they were the hardest of hard. I knew the color guard and the Body Bearers as they were named. And of course the platoon behind me as we marched over hill and dale to the grave site. Always solemn, always in step as we followed the caisson. Those are days I will never forget as I still hear the sounds of those you mentioned. I must read that book, thank you Sir!