PAYING TRIBUTE TO WOMEN VETERANS AND RESPECTS TO HUSKER MARINES

I still can't shake the Nebraska off of me. Andrew Rannells

Never did I imagine living in Nebraska.

The culture. The people. Here they call it "Nebraska Nice!"

Nice. Yes, it's nice. And a lot more than that.

The last Sunday in September a group of 135 female veterans gathered in Omaha for the first ever of its kind "Honor Flight" to Washington, D. C.

There's plenty on the Internet if you want to research and learn more. So, for the purpose of this commentary I'll refrain from all the background, behind the scenes work, and program and trip particulars.

For to attempt, I'd slight. And especially to the incredible quilters I'd not want to do that. Look them up, too - a  beautiful homemade quilt gifted to each veteran. They were stunning!

Suffice to say it was a First Class operation - from sign in Sunday afternoon to Welcome Home at Eppley Airfield Monday night to an enormous cheering crowd - that required a Herculean effort by hundreds if not thousands in support.

About a hour before the return flight landed I had chance to meet and speak with the flight's brainchild, Bill Williams. I do not know if he's a veteran. But he reminded me of a quiet field marshal who had every detail on his radar and under control. His wife, Evonne, flew with the veterans. [Bill and Evonne have organized previous trips for male veterans. I forget if this one was 9 or 10.] 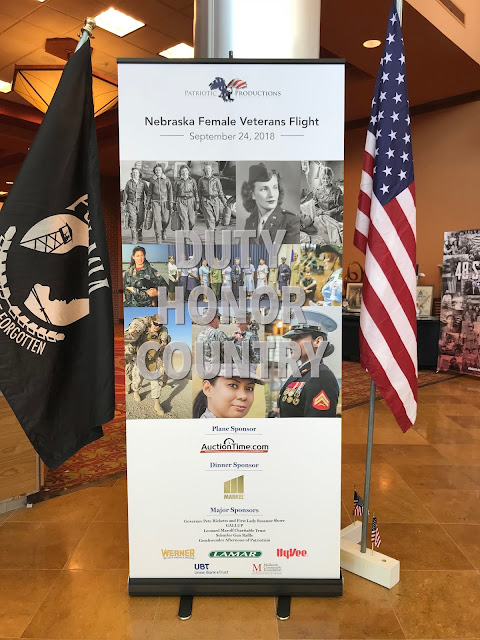 First of its kind

To be present beginning Sunday afternoon my good fortune.

Remarkable women I met - service in war going back to World War II. The oldest 98 - a nurse in the South Pacific theater.

A few of the younger women were accompanied by service dogs. I listened to some stories. A prayer for them. To watch the disciplined dogs work amidst hundreds of strangers and noise was quite something. Calm. It is rather peculiar to think of an animal in terms of being professional but that's the word that keeps coming to mind. Their training apparent in their discipline.

Loretta Swit (Major Margaret "Hot Lips" Hoolihan, U. S. Army on the TV program M*A*S*H) was there. As guest of honor, she met with the veterans (others too) for photos, spoke at dinner, and fell in early the next morning to fly with the veterans.

There was a few minutes to meet and speak with her. From appearance to demeanor, in a word: polished. Her memorable comment to me, "I love Marines!"

Too there was time to visit with a number of the women including some not veterans but program volunteers.

One stuck out. Basically a peer, she told me her dad was a Marine and had fought his way out of the Chosin Reservoir. I have a friend whose dad led Marines in that fight. And have read most everything written about it. Brutal winter conditions and brutal combat.

She beamed remembering him and telling me how proud he was to be a Marine and likewise she to be the daughter of a Marine. Language, she said, sometimes got colorful when he spoke about being a recruit and his DIs and fighting in Korea.

With mention of knowing something about recruit training, I told her Marines had a saying but I was hesitant to share it with a woman just met for a little salty language.

Well, it goes like this, "Your heart may belong to God but your ass now belongs to the Marine Corps." She burst into laughter. Her eyes sparkled - "You sound like my dad!" 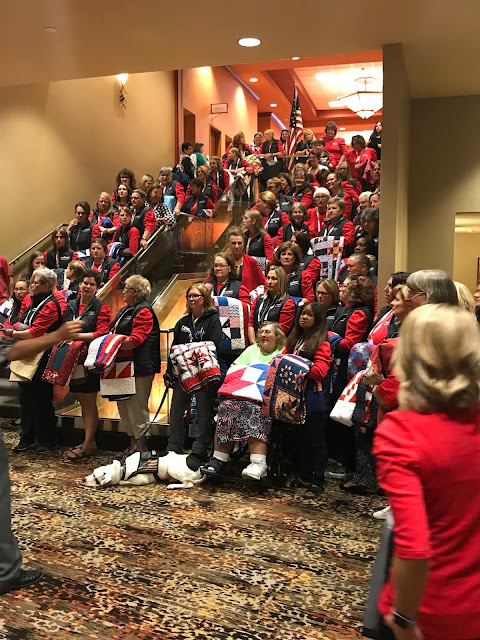 Patriots - 135 female veterans with their quilt(s)

Now about those Marines ...

A traveling display honoring Nebraskans killed in the line of duty graced the lobby.

Every one of them I looked at.

I photographed the Marines.

Where do we get such people?

Below is a squad's worth of Marines. Their photos large for ease of reading. Take a few seconds on each - name, home town, date of death and cause noted. Pay respects. Think about their families; lives changed. 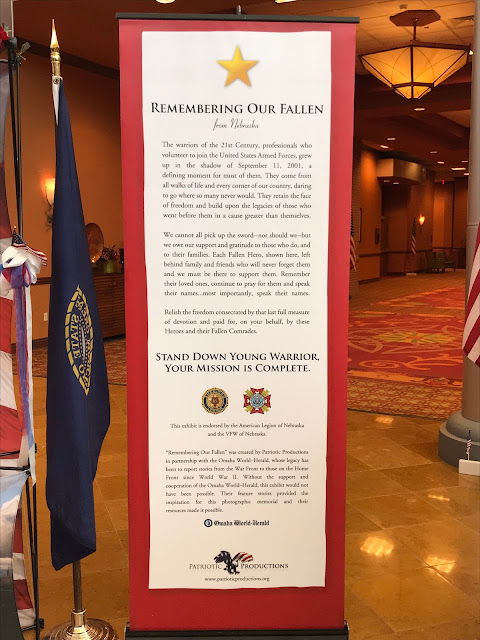 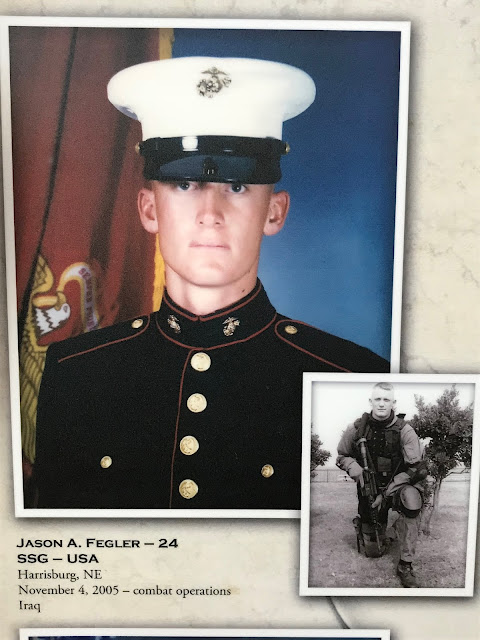 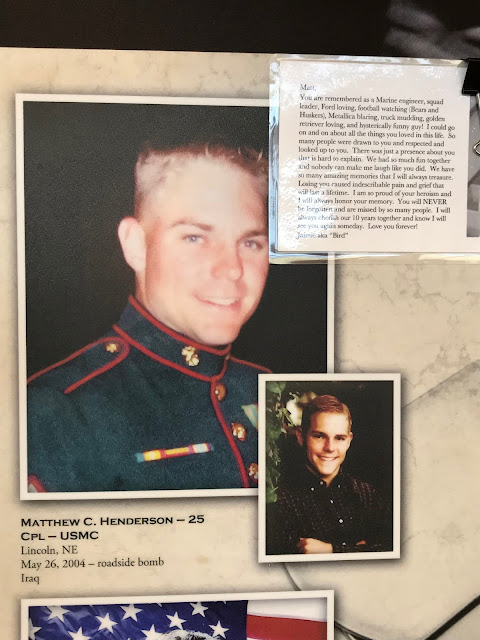 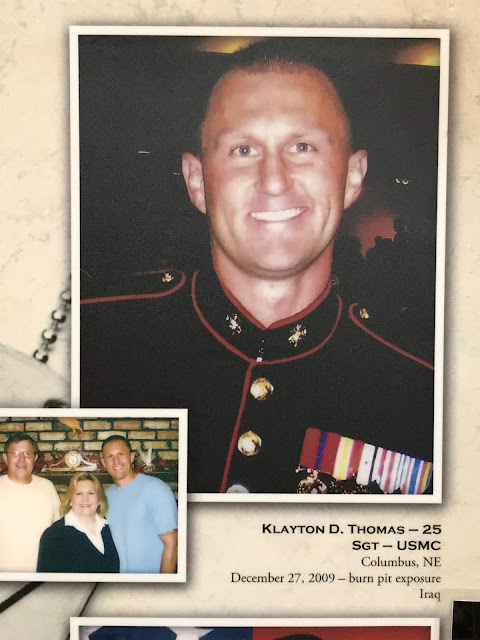 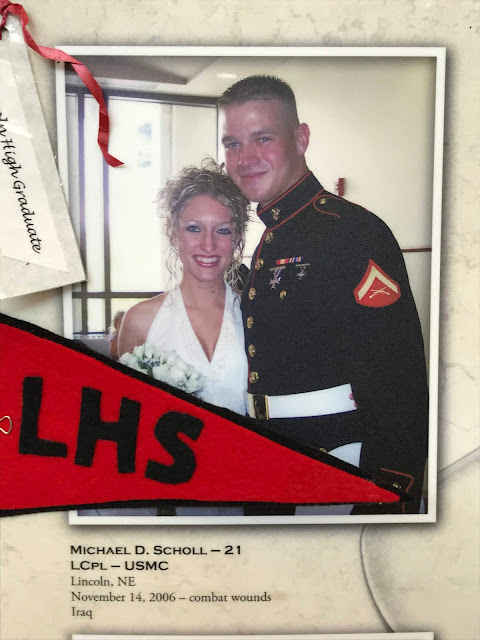 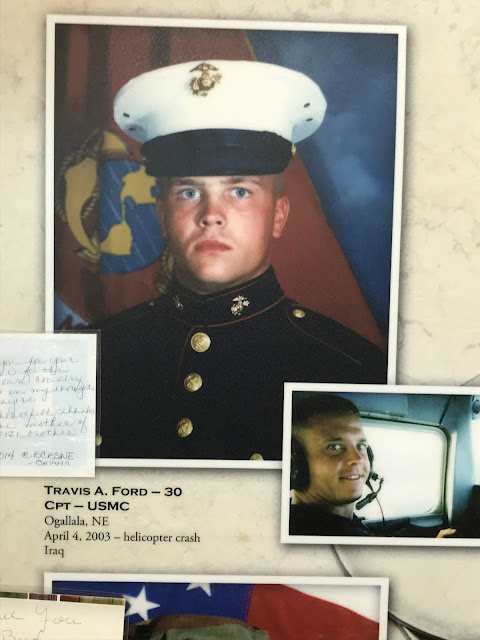 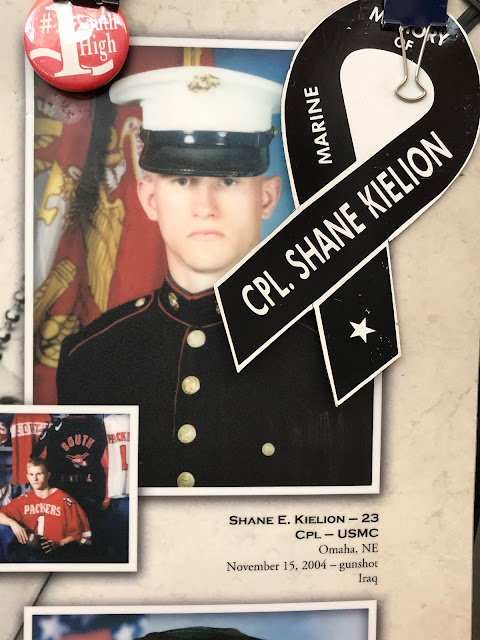 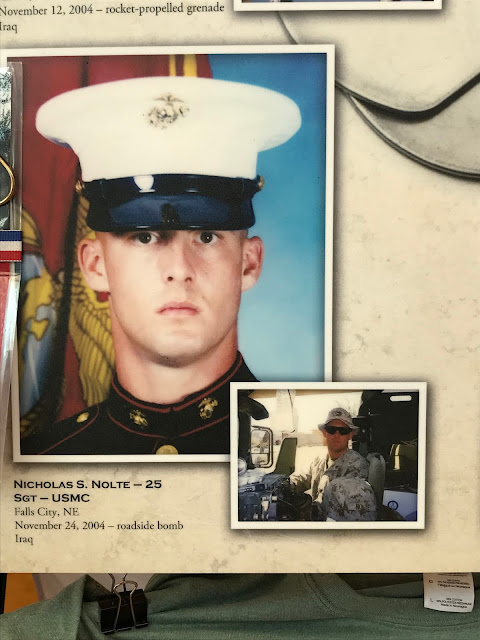 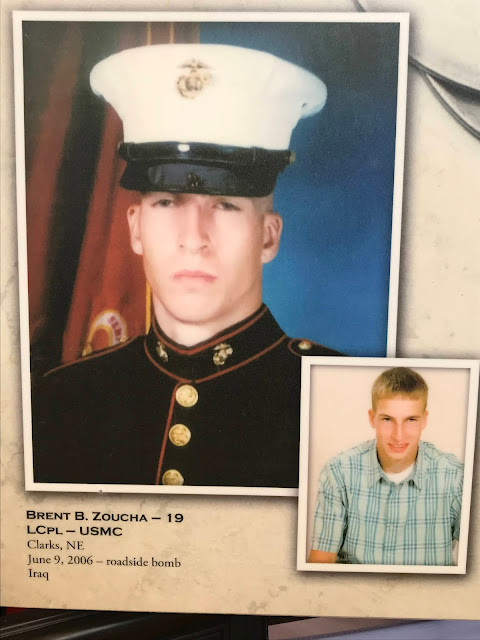 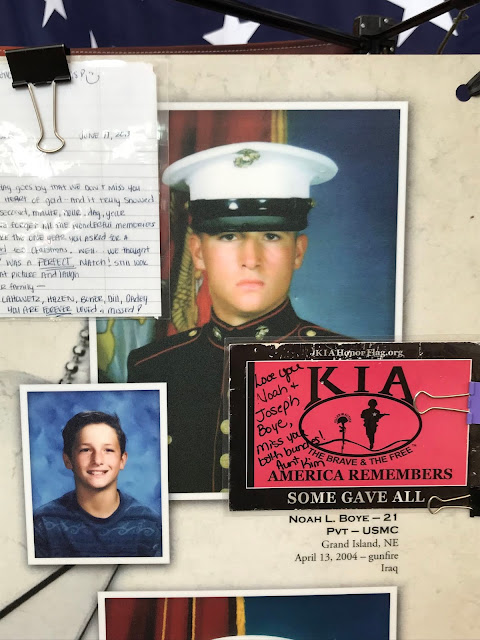 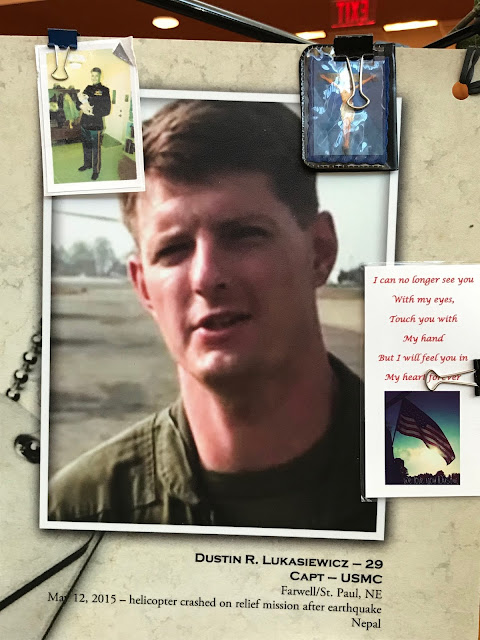 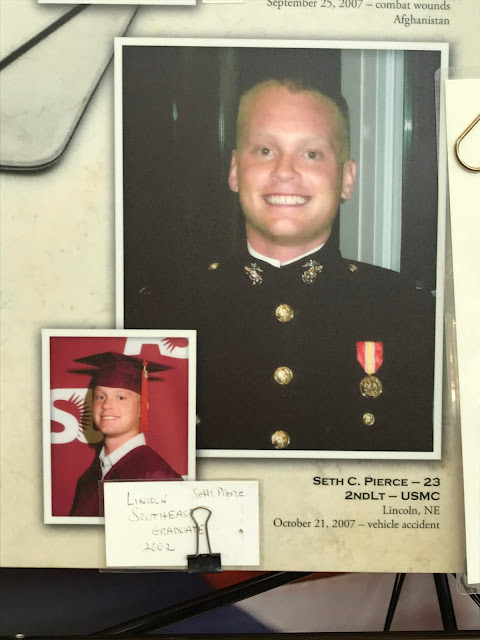 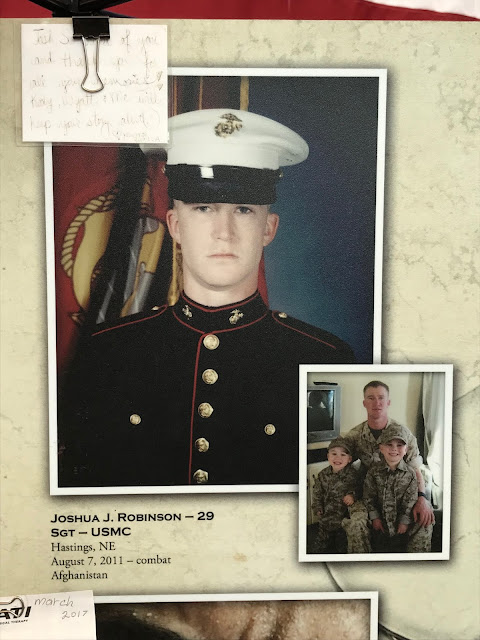 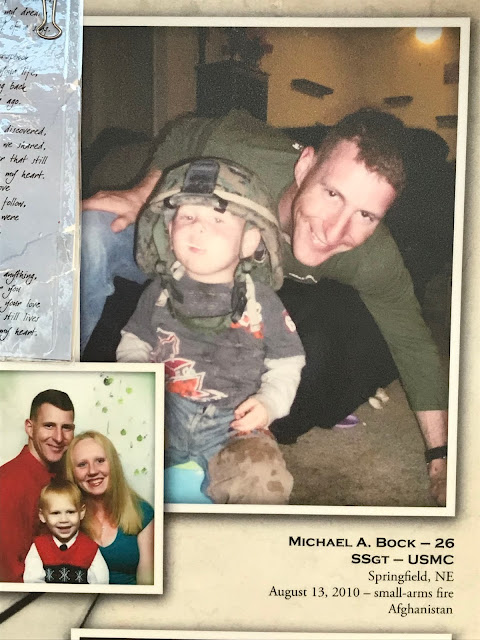 Those men I never met. But Marines - they are my brothers.

I do not know for how long we'll live in Nebraska but nor will I, thankfully, ever be able to shake the Nebraska off of me.

Several more states on both coasts with a culture of "Nebraska Nice" would do this country a world of good...Great blog!

Since this was about an all female honor flight, you might have included the females who've died in this and other wars. We've had 9 female Marines die since 1997. (Sorry I don't have the numbers for the other services.) One was out on a road block searching females. Getting into the truck to go back to camp she and a Navy female were killed, many others injured, when an IED blew up their truck. Their CO told me that when the unit found out about it, all the other women in the unit lined up outside his office volunteering to go out next time. I've read a story about one who did everything you'd expect a male infantryman to do when her unit came under attack by setting up a perimeter, etc. Too little is known of their heroism and actions under fire. Carol Mutter

@ Carol Mutter ... Yes, ma’am, concur. However, the focus for commentary was Nebraska - the women veterans flight and Marines killed in the line of duty. On the Remembrance Wall was a number of women, from Nebraska, killed in the line of duty. But none of them Marines. Had any of them been Marines I’d have duly photographed and included with their brother Marines pictured. I did not overlook the ultimate sacrifices of women rather, at the time, my focus was on Marines. Too little is known not just about women but about everyone who has been under fire. In conversation just last week, I opined every Marine who ran down an amphib tractor ramp hitting hostile beaches in the South Pacific (WWII) should have been awarded a Bronze Star w/ V. In retrospect what those Marines did difficult to comprehend. It won’t take 75 years to better appreciate the courage of women in recent years. You stated the matter well. Noted. Thank you!