MARINES - EYES OF CONFIDENCE
By Andy Weddington
Thursday, 31 May 2018

Last night came email from a retired Marine friend about a Marine by the name of Mitchell Paige.

Colonel Paige is a hero of our Corps. As a sergeant and squad leader on Guadalcanal (WWII) his battlefield prowess epic. And recognized with award of the Medal of Honor.

Rather than recap his remarkable story in this commentary, take a moment: https://en.wikipedia.org/wiki/Mitchell_Paige


Two recent commentaries noted another WWII Marine who, too, fought at Guadalcanal.


Tuesday evening, following publication of Marines Cast Giant Shadows, arrived email from an address not known to me.

The first three letters of the address: plc

To a Marine (at least to officers) the first thought being Platoon Leaders Class (an officer candidate program for college students).

The plc was followed by three digits. So, logically, I suspected a PLC class number.

The writer addressed me formally. And thanked me for writing - about his great uncle.

The writer's grandfather, a retired Air Force colonel (flew with the Army Air Corps during WWII), was older brother to Marine PFC Charpilloz.

Geez, I was stunned!

More stunning was a photograph he included of PFC Charpilloz.

"I've also attached a picture of Lyle that was taken after Guadalcanal. Even though he was still just 16, you can see that the scared kid from a year earlier, was now a confident Marine." 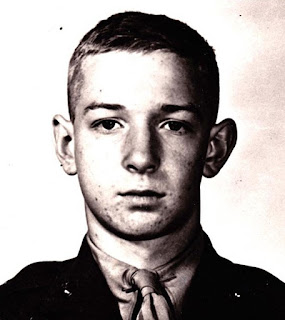 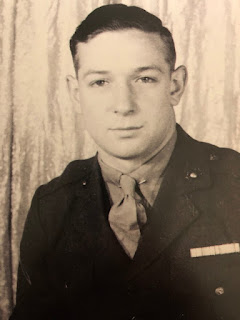 Left: Private Charpilloz in 1942, age 15, as (fraudulent) enlistee and graduate of recruit training.

Right: PFC Charpilloz in 1943, age 16, after fighting on Guadalcanal.

For a good long while I sat quietly and stared at the two photographs of PFC Charpilloz - and wondered about this young Marine; in contrast to what I was doing at 15 and 16 (of which enlisting in the Marine Corps was not on my mind).

His great nephew correct - a battle-tested Marine with eyes of confidence.

Still this morning it is difficult to fathom while last evening wondering if PFC Charpilloz knew or fought with then Sergeant Paige.

A friend retired a colonel a year before me.

Before commissioned he was an enlisted Marine and veteran of the Vietnam War.

As I recall, he served some 35 years.

A line from his farewell remarks talking about Marines has stayed with me ...

"In all my years of service, I never knew a Marine who got out of the rack in the morning, looked in the mirror, and said, 'I'm going to fail today.'"

And so it was on Guadalcanal that Sergeant Paige and his Marines did not fail.

And PFC Charpilloz did not fail - he survived.

PFC Charpilloz did not - he was killed, age 17, on the first day of fighting on Betio during the Battle of Tarawa.

A full life. A short life.

In fact, their example enduring as a standard of duty for generations of Marines to come.

There's nothing quite like that look of confidence in a Marine's eyes.