CASUALTIES OF TARAWA
By Andy Weddington
Tuesday, 22 May 2018

"Every place on the island can be covered by direct rifle and machine-gun fire." Colonel Merritt Edison, USMC (describing Betio)

Yesterday on social media was posted a photograph of the headstone of my maternal grandparents - "Pop-Pop" and "Nanny" to their grandchildren and great grandchildren.

They were flag-waving patriots. And as big as they come for love of country.

His life at that age unknown to me (known is my mother was 6 and oldest with seven more to come) but he did not serve in uniform.

Too yesterday I learned ...

He was in uniform.

20 November was a Saturday - the first day of fighting the Battle of Tarawa (20-23 November). 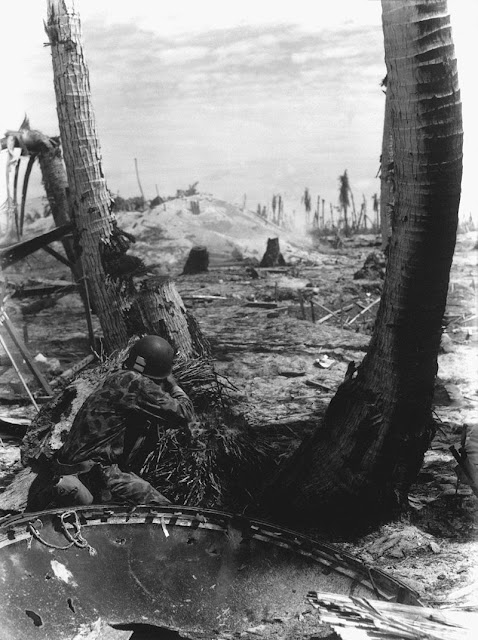 U. S. Marine fires on a Japanese pillbox.
Wikipedia photograph

His remains were not officially identified by the Navy until 2017.

He amongst other fallen warriors were discovered in Cemetery 27 - The Lost Cemetery on Tarawa - unearthed under a parking lot during a construction project.

Before falling asleep last evening, PhM2c Murphy and the warriors of Tarawa were last conscious thoughts.

During research this morning over coffee came an important website: www.chiefrickstone.com

Considerable time already this morning I've devoted to learning more about Marine Corps history and a little about the young men who fought the Battle of Tarawa. PhM2c Murphy amongst them.

On the "In Memoriam" link the black and white photograph and brief biography of PFC Lyle Ellis Charpilloz, USMC jaw-dropping.

To say more would be great disservice - to the casualties and to the remarkable and noteworthy work of Chief Stone and his Foundation.

So please spend some time on the website. Visit all links. Pass along to Marines, Sailors, and everyone.

This Memorial Day, PhM2c Murphy (his 96th year) will be laid to rest, with long overdue military honors, in Ohio. A Sailor I know will be there.

John Clay Kirk, Sr. was "Pop-Pop" to three Marines, a Coast Guardsman, and a Soldier and (great "Pop-Pop") to two Marines (I think that accounts for all bloodline to date).

Fittingly, he has family, military, residing in Ohio.
Posted by A Colonel of Truth at 7:32 AM