This time 38 years ago it was damn cold in Quantico, Virginia.

Marine Corps officer candidates had to break ice to negotiate the Quigley concluding the Endurance Run.

Crawling into the trench of frigid muddy water, following some 50 minutes of running and negotiating obstacles while clad in utilities and boots bearing light combat load and rifle, triggered an involuntary heavy gasp and shiver (and expletive or two) - then forward movement through the water and water-filled culverts.

All the while company staff paced the banks barking "encouragement" and quietly went about their serious business of evaluating candidates for commissioned service - to lead Marines.

Charlie 2 - 2nd Platoon, Charlie Company - started with about 60 candidates (as I recall). 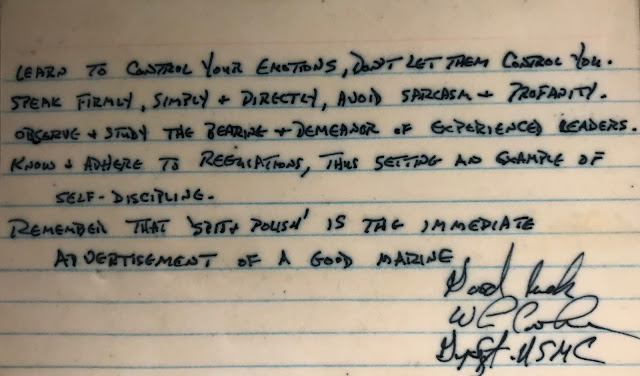 Succinctly, Gunnery Sergeant Cooke summarized the round-the-clock example he set for his platoon of candidates - men he'd later in the day salute, address as "Sir," and inevitably later follow.

The Quigley is vivid in memory.

More vivid is Gunnery Sergeant Cooke and his leadership - a model to emulate still.

Reviewing his 15 square inches of timeless leadership again yesterday it dawned on me many - in uniform and not, Marine or not - serving our country just might benefit by making a copy and keeping it close to heart in coat pocket.

Gunnery Sergeant Cooke was the epitome of 'spit & polish' - immediately advertising he a good Marine.

In all on his hand-written charge, he practiced what he preached.

He set the example.

He retired a Chief Warrant Officer 4.

Andy, many of "us" had our GySgt Cookes. Mine were "JC" Laplace, (we all knew what the JC stood for), Cobb, Brinkman, and many more. They all were my mentors as a young enlisted Marine. They taught me Gunnys rule, so much so that's all I ever wanted to be. One comment you made re spit and polish being an immediate sign of a good Marine needs a cautionary addition. GySgt Brinkman would say, "Beware of the 'Cocker Spaniel Marine' for they lurk among us." Having read the book, I'm sure the term needs no explanation. The civilian equivalent is, "Be careful of judging a book by it's cover." Oh those wonderful, magnificent days. We'd all do it over again and probably not change a thing. Semper Fi my brother!

I would certainly agree, Jim. I would lay emphasis that, just in business, that "advertisement" is the all-important "first touch" with your customer, and it had better be the desired one. After that, you'd better back it up.

Andy-- thanks for bringing back the memories of 2nd Plt C Co, PLC 113. With a warm heart I remember the fridged Quigley course, Gunny Cooke and the rest of our fun times at OCS. I enjoy your blog site- keep up the good work. S/F Bill Taggart (USMC Ret)

Well, Bill Taggart, thanks for the note. Great to hear from you. Still remember that (infected) thumb and we finally shamed you into going to sick call. And, of course, “rwo bolts” on inspection morning. Hilarious! Great memories.