Every time I paint a portrait I lose a friend. John Singer Sargent

Yesterday morning after spending a couple of hours in the studio cutting canvas I took a break and stumbled upon coverage of the ceremony unveiling the official portraits of the Obamas.

A painter, of portraits and most anything, the public reaction - praise and pan - not surprising to me.

Long ago I came to realize that if but half of those seeing a portrait like it then it's a smashing success.

And that conclusion not only logical but reality.

For people see other people differently.

A husband sees his wife differently than the same woman called mother. Her parents see her differently. If siblings, differently, each, still. Likewise, relatives, friends, classmates, and strangers.

And she sees herself differently than all; down to the "flaw."

In a portrait, physical resemblance is but one aspect.

John Singer Sargent, the fabulous American painter and in-demand portraitist of his day, quipped, "A portrait is a painting with something wrong with the mouth."

For good reason - it is difficult to freeze, in a pleasing natural way, a feature not so often seen at rest.

And then there is the psychological resemblance. And that goes to how someone is perceived by everyone else. Differently.

President Lyndon B. Johnson was not especially pleased with his portrait by Peter Hurd. And the critics soon wrote that artists were welcome to be seen in Washington, D. C., but not Hurd. A rather light sentence considering there was a time (and still may be in some countries) some portraitists were beaten with their maul stick and hanged.

So when the drapes were removed from the Obama portraits my first thought was the story of the unveiling of John Singer Sargent's Madame X.

Just beginning his career, the talented Mr. Sargent was forced to flee Paris for London.

Not immediately but gradually formed a line of wealthy patrons willing to subject themselves to Sargent's penetrating eye and dazzling brushwork.

But all the "mugs," as Mr. Sargent called them, (technically) stunning.

There was no mistaking a Sargent portrait.

And so the Obama portraits - by artists I'd not heard of until yesterday (Wiley and Sherald) ...

In the Obama portraits there is truth and caricature - necessary elements in any portrait. And the line of exaggeration fine.

And, yes, something wrong about the mouth, in each.

All open to interpretation.

Where in the President's some see flowers others see (poison) ivy and in the First Lady's maybe a judicial connotation of black and white.

Critics can be brutal.

That the canvases depart from tradition, inarguable.

But do the portraits reflect them and their eight years?

The answer may be yes but in opposing assessments.

Regardless, in our National Portrait Gallery they will hang.

That they today are all the talk, folks will go - to gaze, to gush, to gawk, to giggle.

Yet, in time, those two artists - for their momentary fame - will in all probability realize a line of wealthy patrons willing to subject themselves to their painter's penetrating eye. If for no other reason than to claim their portrait was painted by the artist who painted President Obama or Mrs. Obama.

In the end, only the sitter's take matters.

They see themselves differently, if you please.

And painter need not necessarily flatter - free or fee.

As I see me (yet understanding all who know, or not, me will not agree) ... 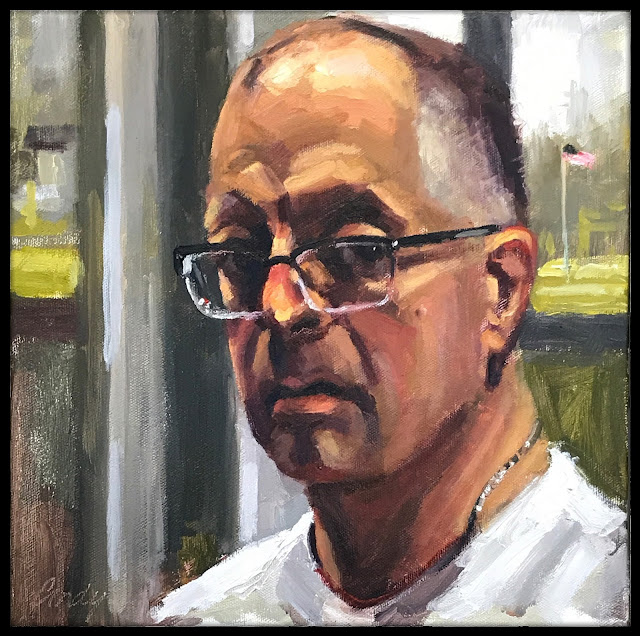 Unlike Mr. Sargent, not too many friends lost have I. And the line is not getting any shorter. Still quite reasonable the fee.