Anyone can hold the helm when the sea is calm. Publilius Syrus

For the past couple of weeks my days occupied looking at harbor-moored boats - mostly sailboats - all times of day and in all sorts of weather.

The fall of sun and daylight, sweep of lines, and movement of primary interest to sketch and paint.

Dozens of sketches and paintings.

This moment last week, unbeknownst to me, a sailboat - lost but afloat on the Atlantic - struggled.

Little more than twenty-four hours later an ordeal over.

Last Tuesday morning I first heard then saw a U. S. Coast Guard helicopter over the cay.

They were looking for something or someone.

An hour or so later I learned that Monday night a sailboat was pushed through the dangerous reef (guarded by the Elbow Reef Lighthouse) and heaved onto the beach.

A 14-days struggle to survive over for the captain, his mate, and a couple of dogs.

Last evening I met the captain.

He survived the Hurricane in Puerto Rico.

Home and property destroyed, he rigged his boat to make way for Florida.

A damaged boat made for hundreds of miles off course to the east.

No GPS. No radio. Other problems. And more than a dozen flares futile.

Over the dune where beached his good fortune was to find good samaritans - friends of mine. A Navy man and his wife. Too, sailors.

And others to the rescue.

Help and medical care and such as needs go for beings and beasts lost at sea followed post haste.

Not a boater, I'd not heard of it. Through conversation and research I've learned the Westsail 32 is basically a floating tank - built for rough seas.

The captain told me the boat saved his life (and crew). His story incredible!

It was his 'lifeboat' (though he had a lifeboat proper aboard but did not consider using it).

This morning, under a dark stormy sky, I walked to the beached boat.

I sketched a baker's dozen in ink.

And later painted from one of the sketches.

Though not moored and not afloat, she is beautiful.

The fall of light.

The sweep of her lines.

Still, she is the most interesting boat I've sketched and painted.

Without question because of her unnatural position in a natural setting.

And more so that she did exactly as designed and built - survive rough seas to preserve life. 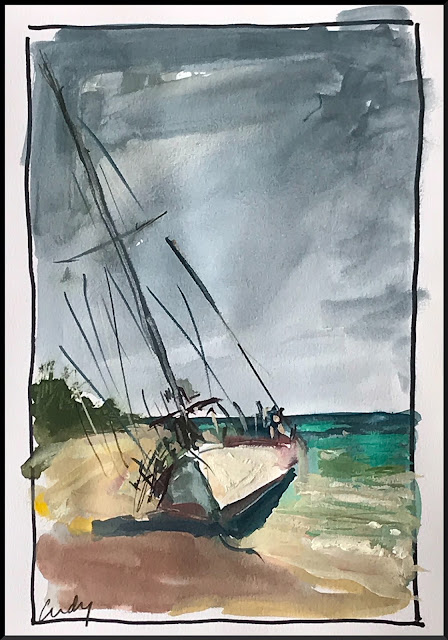 Ellipsis
10 x 7 in.
gouache
Ellipsis is not salavageable.
The captain intends to have a new boat within a year.
Boat life nor lifeboats interests me.
But I so enjoy looking at boats.
And sketching and painting them.
Though never again will a sailboat look the same to me.
Tomorrow, more sketches and paintings - of Ellipsis and others.
Alas, still people help. So perhaps some men and women of the sea out there will, too.
https://www.gofundme.com/help-scott-begin-again

Oh, his grandfather a Marine. He fought on Guadalcanal.

Grandson not a Marine but, like a Marine under fire, he kept calm and held the helm.

Granddad would be proud.

Wonderful story! Yet boat life is not for me.
USS Beleau Wood, USS Denver,USS Tarawa, USS Pellileu, have all taken me to where we Marines were needed.
All brought us back safely, yet today they only sail in seas of our memories.
Thank you!
Jorge

That gave me chills. Truly an exceptional piece full of images created in my mind from your descriptive word. Have been in only one small boat "scare" and had the good sense to recognize, and the fortune of, a following sea that with God's hand took me to the port from which I launched -Port Fourchon Louisiana. My other rough sea experience aboard an LST in the South Pacific in the summer of 1992. Her 522 feet tossed about by the seas for an eternity of eight hours like a dingy. My respect and appreciation for Sailors elevated again. Calm men at the helm indeed. Perhaps a picture of the skipper and his crew?

Love this. Love the story. Love your painting. Love the observations and reflections. Poignant, moving. Best you've ever posted.

Thank you for sharing this story and your beautiful painting. The sailor you write about is my son's father. I remember Pops - the marine who fought in Guadalcanal - he was a remarkable man, full of good-humor and love for his family and his country. I also remember the first time Scott told me the story of Pops, and how radiant with pride he became in the telling of it. Scott certainly inherited much of his grandfather's strength and grit. We are so thankful that he is alive and that this tragedy has had blessing after blessing unfold in its wake. How uplifting it is when strangers become friends. Bless you and yours. - Jennifer

Thank you, Jennifer, for adding a bit more to the story. Circumstances aside, glad to have met Scott.