THE BRIGHT AND THE NOT-SO-BRIGHT

THE BRIGHT AND THE NOT-SO-BRIGHT
By Andy Weddington
Friday, 08 December 2017

Sometimes I wish I was poetic and subtle. I write very bold and blunt and tell it like it is. Pink

Earlier this week we decorated our Christmas tree.

Tradition is start at the top - with topper.

And so today a short commentary starting at the top.

On this morning news a clip of Barack Obama making public remarks taking credit for our recovering economy.

I nearly spewed my coffee.

Here is a photo, taken last evening, of our illuminated tree. 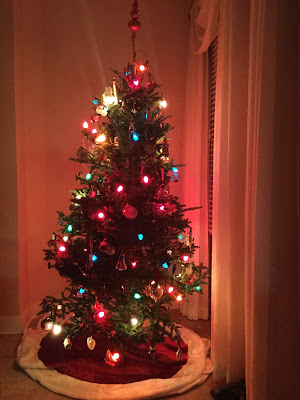 Our tree is bright.

In fact, with the ever-unraveling of Hillary Clinton's crimes and FBI corruption at the top levels - working to take down a candidate for President and that elected President - it is inconceivable President Barack Obama was not party to while in office. And still.

Charge him. Try him. Jail him, if proved guilty (which cannot possibly be difficult to do).

Yesterday I watched most of sitting FBI Director Christopher Wray's testimony before the House Judiciary Committee.

Blah, blah, blah. Along with refusing to answer questions.

But it is not so reassuring when a top law man has to describe a "serious" investigation as "very, very, very."

No sir! It is serious or it is not. And it sounds as if it is not.

The FBI is not credible.

Director Wray's saying so does not restore credibility.

A drop of poison pollutes the well.

Multiple top-level FBI agents colluding (and they are still being outed) with a political party?

Nor should Americans necessarily swallow any defense for "rank and file" FBI agents. For certain some were actively party to crimes. How could they not have been? And those not are guilty of complicity. No passes. No matter what, oath and duty is to country. For not moral courage, find employment elsewhere. Save alibis, extenuation and mitigation for God. Charge all.

The only obvious conclusion?

Those crimes now publicly known are much worse - deeper and wider.

President Trump still has a big mess to clean up at the Department of Justice.

Did you see Senator Al Franken's public remarks promising to resign in the coming weeks?

For his inexcusable personal conduct, he opened with shots at President Trump and Alabama candidate for Senate Roy Moore.

What he should have said ...

"I have been unmasked a creep. Therefore, for personal conduct not worthy of the title Senator, I am resigning from the United States Senate - effective immediately. Thank you."

Congressman John Lewis (D, GA) - who boycotted President Trump's Inauguration - decided he'll not attend the opening of the Mississippi Civil Rights Museum on Saturday because President Trump will be present.

In less than a year President Trump has done more for black Americans than Barack Obama did during 8 years.

Congressman John Lewis, for whatever good he has done, has lost his way as a public servant - following the losing Obama model of 'leadership from behind.'

Leadership. From the front. Brilliant. Bright!

Unlike Pink, I do not care about being poetic and subtle.

What I care about is facts and truth and could care less who agrees or takes offense.