MEN WHO GO OUT INTO THE COLD

MEN WHO GO OUT INTO THE COLD
By Andy Weddington
Thursday, 28 December 2017

All pictures painted inside in the studio will never be as good as the things done outside. Paul Cezanne

Books on painters are shelved throughout our home.

Most every day a different one absorbs considerable time.

To study the painter's approach - in words and photos.

Mr. Metcalf is bundled up.

Impervious to the cold, he stands before his easel in deep snow.

That is a painter.

There is no other way to capture (the colors of) truth.

Christmas Eve it was cold - around 0 degrees F.

But that did not deter following Mr. Metcalf's and Mr. Zorn's example.

So it was out into the cold. 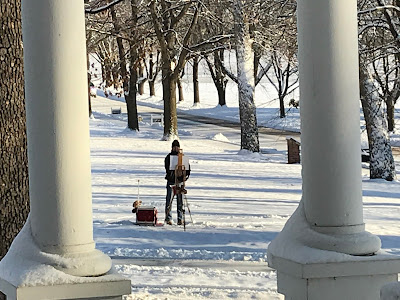 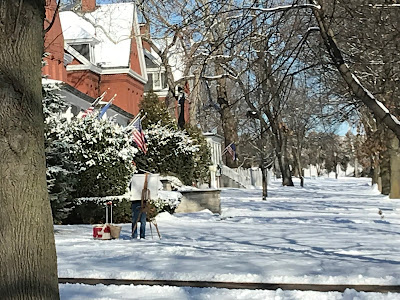 Too, remembering cold weather training above the Arctic Circle some 35 years ago (that did not include painting).

Russia the enemy and concern for NATO's northern flank - through Finland and sweeping down from the north into Norway.

A current events topic haunted. To that in a moment.

For the cold, the few other people I saw were not afoot.

My wife wandered out to take a few photos for the record.

The recorded perspective - from the other side of the easel - a much different sense of things.

The pictured isolation and seeming insignificance not felt with brush in hand. 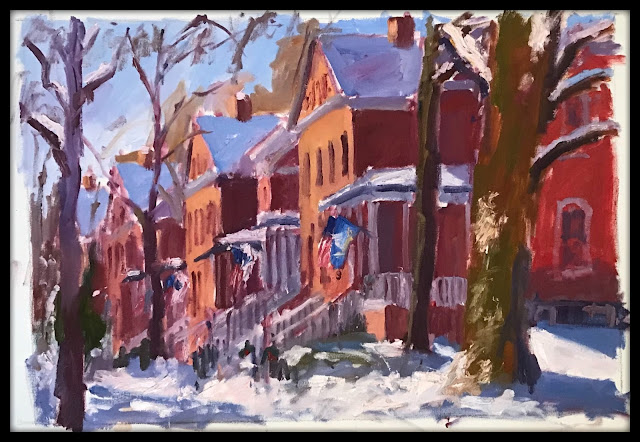 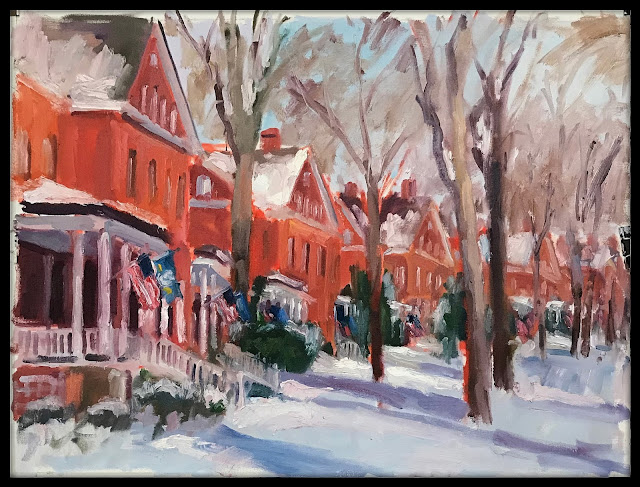 Christmas Morning On the Row
21 x 28 in. oil on canvas

The Russians an enemy still.

But not on mind.

ISIS in the news.

With reports 98% of the territory once held now recaptured thanks to the U. S.

How is it our last President "fought a war" against ISIS for 8 years yet allowed enemy fighter numbers to grow and territory held expand while our sitting President has essentially decimated them in less than a year?

Is there any other logical conclusion than the obvious?

A cold, penetrating investigation in order.

Paint (the colors of) truth.

Mr. Hurt replied, "No. A Royal wedding, no. There's a reason we overthrew the king."

Pretty much the same reason the last President's "work" is being decimated and his chosen heir to the throne crushed.

The people decided - it'll be a cold day in hell.

The day ahead cold.

Time again for this man to go back out into the cold.

You sir are a 19th century man, trapped in the 21st century. Great piece!