We are all members of the same great family ... On social occasions the formality of strictly military occasions should be relaxed, and a spirit of friendliness and goodwill should prevail. John A. Lejeune

Hanging in a meeting room in the Officers' Club at Camp Lejeune (le-ZHURN) is a large painting of Major General John Archer Lejeune, USMC.

The striking portrait, of the North Carolina camp's namesake and our 13th Commandant, is subdued; earth tones (as I recall).

It gives the room life. There's a sense of reverence. And a strong feel of heritage; something important to Marines.

First seeing it 36 years ago, I wondered about the Marine.

And wondered about the painter (whose name is gone from memory).

This morning, for no other determined reason than the 10th is approaching, came memories - back to days when assigned to the 2d Marine Division (Camp Lejeune) and duties as an infantry platoon commander in 2d Battalion 6th Marines.

Those who have led a small unit of Marines know there are not words to fairly describe the privilege, challenges, and rewards.

With our Corps birthday but five days away what came to mind over coffee - while watching the fireplace and contemplating the day in the studio - was my first birthday in the division.

Our regiment formed. Thousands of Marines in the Service Alpha uniform; an impressive sight.

Our regimental commander offered a few words. Cake cut - oldest Marine passing to youngest Marine. But, of course, first the traditional (since 1921 and by Marine Corps Order) reading of General Lejeune's message.

The opening of four short paragraphs ...

"On November 10, 1775, a Corps of Marines was created by a resolution of the Continental Congress. Since that date many thousand men have borne the name Marine. In memory of them it is fitting that we who are Marines should commemorate the birthday of our Corps by calling to mind the glories of its long and illustrious history ... "

For whatever reason, the image of that portrait of the General would not fade.

Perhaps because he is often referred to as the "greatest of all Leathernecks" and a "Marine's Marine."

Remarkable monikers considering battlefield heroics of many a Marine.

With coffee cup in hand heading down to the studio, an idea to paint something Marine for this 242nd Birthday.

A fresh canvas leaning against a wall unwrapped and placed on the easel.

An old wood spindle back chair a few feet away to sit and stare at the canvas.

For about an hour only howling wind interrupted train of thought.

Then the subject clear.

But not earth tones.

Something colorful - representational (not photorealistic) - of a distinguished combat decorated Marine.

Armed - with brushes, knives, and rags - the canvas attacked.

Hours later - with pauses to rest, regroup, and study - done.

Paintings are never finished. There's always more that can be done. But to what point? So stopped at an interesting point. Enough said.

A great family are we. 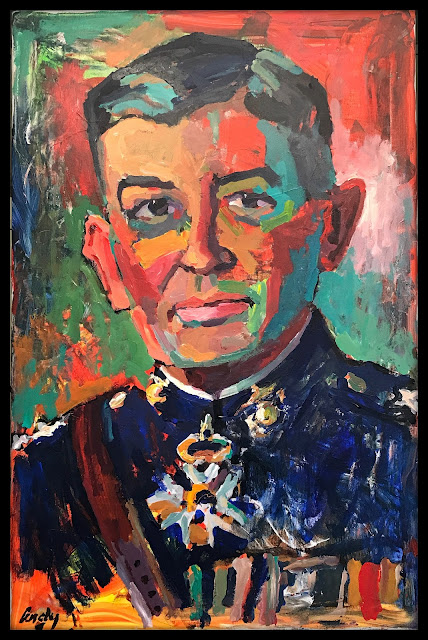 What a likeness. Happy Birthday Andy. Raise a toast and remember "Huxley's Whores," What a great battalion it is.