A picture is worth a thousand words. A satellite image is worth a million dollars. Sarah Parcak

Late yesterday afternoon, comfortable on the sofa working on a drawing on my iPad, the back doorbell sounded.

Not expecting anyone, to answer was interrupting of drawing and required walking across our home and down a flight of stairs.

Usually, from the top of the stairs and for all the glass, it's possible to determine the visitor.

So down the stairs and into the mudroom before able to identify the caller.

Costumed in red - with masks.

I did not know them.

Opening the storm door, "Well, hello, girls! What are you and what can I do for you?"

Giggling, "Sir we're owlets and practicing for Halloween trick or treating ... and we have a song for you ... 'trick or treat, smell my feet, give me something good to eat ... '". More giggling.

"You look great! But you do know Halloween is a couple weeks away?"

And then they were off - carefree having fun, skipping and giggling.

All the while the drawing was on my mind.

Up the stairs and back to my sofa nest and iPad.

Minutes into drawing I remembered my wife had shown me a basket of candy she was amassing for the trick or treaters.

Thought: Damn, I should have given them some candy. It'd have been good practice.

But that thought would not go away.

iPad down and to the kitchen.

In a cloth bag went a few handfuls of mini candy bars and I went out the back door in search of the little girls.

Walking down the street a neighbor a few doors down waved. I called her name to get her attention before she went inside.

I mentioned the girls and the visit.

They were hers and in the house, and so were a few other children from the neighborhood - all working on Halloween artwork.

Inviting me in, I told her it was my turn to practice and had brought candy.

She called for them to come downstairs. Still costumed and with candy bags in hand I tossed a few pieces in each. And glad to have brought extra for the others.

Mind at ease, I walked (giggling but not skipping) home to return to drawing.

I saw an NFL team's flag flying from a home.

That sparked an idea.

I saved the drawing in progress and started anew.

Generally speaking, when shaping and analyzing problems, I do not like a lot of words.

Draw a picture. Lines and shapes I understand quicker than words.

Usually some words, but minimal, required.

For the ongoing NFL drama, I came up with ... 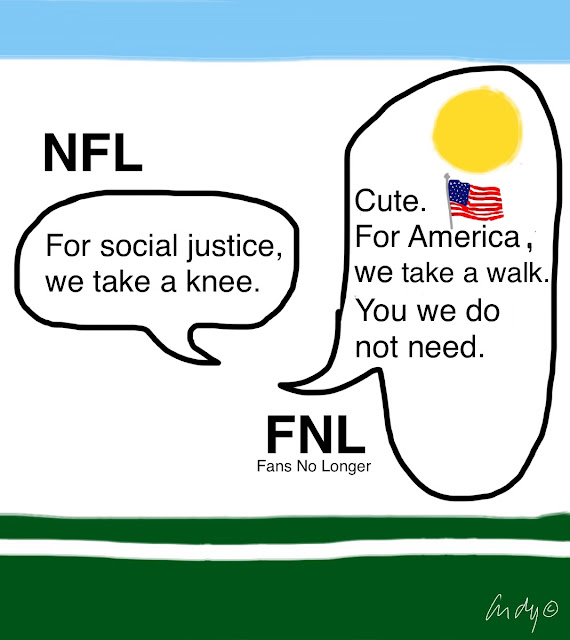 There's a lot going on in the picture when looking beyond the initial statement. Much obvious. Much implied.

This morning over coffee a variant occurred to me ... 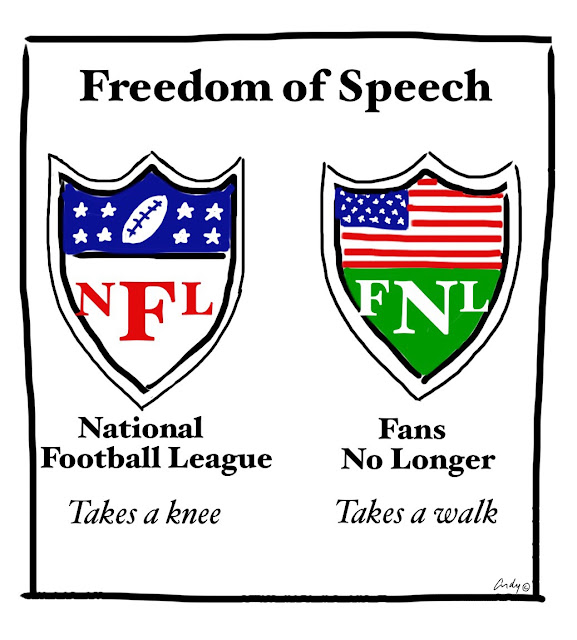 I did not post this one to any social media before writing this morning's commentary.

Like the chicken, this egg says the obvious. Much implied.

I recall a Halloween long ago costuming as an NFL football player - a Baltimore Colt.

My costume not store bought but homemade.

Dad helped me draw and paint blue horseshoes on my old helmet (that had a one inch wide red not blue stripe running down the center). (What a great memory for me this morning.)

When reflecting, I still sense the excitement.

In those days I played a little football (backyard pickup and organized) and watched the NFL - favored teams being Chiefs, Colts, Cowboys, and Jets.

Not too many years later I quit watching NFL football. And do not remember the last game watched.

I wonder how many children will costume as NFL players this year? And cheerleaders?

And how many of them will take a knee on a porch while uttering "Trick or Treat!".

What an image. Satellite not required for detail nor clarity.

A picture. A thousand words. A million dollars.

Pass not football but candy, please.

Let's hear it for calories! And the wonderful innocence of childhood.