A FEW FLASHBACKS AND MAJOR MCDANIEL

Our flag honors those who have fought to protect it, and is a reminder of the sacrifices of our nation's founders and heroes. As the ultimate icon of America's storied history, the Stars and Stripes represents the very best of this nation. Joe Barton 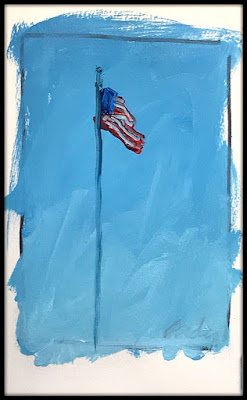 Yesterday in the studio, windows to my rear and more than ajar to enjoy the cool, crisp air, a sound caused me to abruptly turn about and look outside.

What first caught my attention was our waving flag on the other side of the massive parade field across from our home.

The canvas on the easel I set aside and put a small piece of paper mounted on a lightweight board in its place.

It took but a couple minutes to paint the flag.

Whilst brush in hand, I thought ...

About - schoolboy days during the mid to late 60s and many a time respectfully hoisting (sometimes half mast) and lowering (and folding) our flag on the pole outside fronting entry to our small parochial school in then what was mostly a mill town in North Carolina.

Unless the weather was especially inclement, all classes (one each grade - K-8) formed in the semi-circle drive to honor America by either recitation of our Pledge of Allegiance or singing our National Anthem or another patriotic song.

No one, not even our foreign students, protested.

About - my Great Uncle Dutch's funeral. He was a soldier during World War I. He lost a leg in combat. His prosthetic leg was wood. His foot rubber. I remember not so much about him but I remember him allowing me to touch that leg and foot. With age and understanding, here was a man who not only shed blood for America but sacrificed a limb, and nearly his life; given up for dead more than once.

In another small, mostly mill, town in North Carolina he was rendered full military honors prior to interment. His flag-draped coffin seared into my memory. As is the Army ceremonial detail, 21-gun salute, and Taps. I don't recall him ever talking (at least to me) about his war experiences. Regrettable, that I don't know more.

About - Major John McDaniel, U. S. Air Force, a C-130B pilot, shot down in Vietnam on 26 April 1968. On a mission to resupply men under fire, the plane on final approach was struck by enemy heavy machine gun and anti-aircraft fire and crashed short of the runway. The crew of eight killed. Major McDaniel one of three bodies not recovered.

I did not know him. I knew his wife and sons - Roger, Brett, Gregory, and Neal - they were schoolmates and classmates of my siblings.

Uncle Dutch represented the very best of our nation.

Major McDaniel represented the very best of our nation.

These warriors meet the definition of hero.

For our flag, our Colors, they sacrificed. And their families sacrificed.

I have seen and listened to the arguments, the extenuation and mitigation, and pleas for understanding offered in defense of the (mis)behavior before our flag and anthem.

Bottom line: It is customary, whether codified in print or not, to stand quietly with right hand over heart when in the presence of our flag and playing/singing of our anthem.

Bottom line, as to the NFL: The NFL wants the citizenry it needs to survive. The citizenry no longer wants the NFL it never needed.

Other than the above described customary act, including locking arms (standing or not) for whatever reason, before colors and anthem is not acceptable honoring our ultimate icon and country's very best.

There is something amiss, in head and heart, with anyone who is disrespectful to the iconic symbol that affords freedom to so protest. It's illogical. For if that symbol and what it represents is ever destroyed, freedom is no more.

Something has to be sacred.

In fact, one's agenda notwithstanding, standing respectfully before the flag and anthem is a display of (personal) protection and defense thereof. That is, everyone should be safeguarding these (sacred) symbols - for they safeguard thinking and conduct from atrocious to zealous.

How about NLF - No Longer Football.

Alas, I did not figure out the noise that caused me to turn about and first see our flag. Maybe I wasn't supposed to.

The flag painting: Approximately 7 x 5 in. acrylics on paper. The "white" stripes created using a brush handle point to scratch into a hastily applied patch of wet red. And signature scratched into semi-dry paint as to not detract.