Fifty years ago when learning to draw and paint one of the first and enduring lessons was the power of line and shape. Color, too, but line and shape trump. That is, keep it simple and with one focal point (point of aim).

Ever since, line, shape, and word (and color) have driven my model for analysis.

For decades, Hillary Clinton has been called a liar. And worse.

The FBI, after a long and tedious investigation, not so long ago substantiated Mrs. Clinton a liar. And worse.

The Director, Mr. James Comey, told us so - in fairly simple though sometime nebulous words but no complementary simple lines and shapes. Too bad for that oversight, for words make an impact but powerful visuals sear into memory.

Not surprising, worse to come on Mrs. Clinton, according to the news.

John Boyd invented the OODA (Observe; Orient; Decide; Act) Loop - which has application from war fighting to "war fighting" (business) to education and sorts of fields of arts and sciences. His model revolutionary.

And now to politics - but with OODA, to synthesize Hillary Clinton, translated to LDVJ. 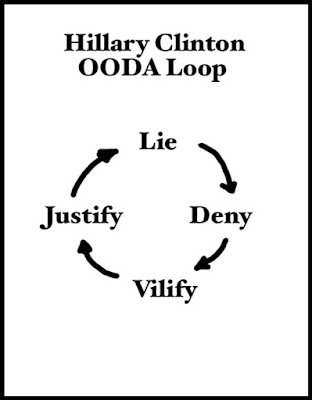 As to Mrs. Clinton, the above picture (slide) is channeled by da Vinci - sophistication for its truth and ultimate simplicity: Word savings of 992 and inestimable number of lines and shapes. Color mute, and moot (though lies are categorized more than black and white).

The focal point/point of aim (bullseye - how fortuitous bull a synonym for lie) clear.  It holds attention.

Speaking of point of aim, were Mrs. Clinton anyone else, looming would be firing squad - or gallows or life in prison.

There's no need to chart those three words - not even as backup slide.