A painting is never finished - it simply stops in interesting places. Paul Gardner

An angel is not the first image coming to mind when thinking about Marines.

But some Marines are angels.

I've known some of them (a TBS classmate was a Blue Angel).

With two naval aviator brothers (though no longer flying), I understand the thrills and tragedies of the profession. And they know them far more intimately than me.

I did not know Major Jeff Kuss.

But of him, for being Marine and aviator, I know.

That he died, doing something he loved, mere days after Memorial Day struck a chord with me.

After attending a service this Memorial Day I was moved to paint. I painted seven or eight small ones - of things seen and remembered - built around our colors.

And I painted a large one that seemed to be missing something.

That painting rested on the easel a few days and I thought about it. Then I leaned it against a studio wall. And thought some more.

I remembered stories my brothers told of (their) close calls and lost squadron mates and friends. And that brought back memories of making a casualty call, for a young Sailor, 28 years ago - his grief-stricken mother thought him an angel (a small, tasteful tabletop shrine to him proof).

That troubling Memorial Day painting was on my mind.

And so was another painting - a failed still life painted in about 20 minutes as a demonstration - that had leaned against the studio wall for some three years.

With an idea, I put that still life on the easel. Turned it 90 degrees to port and painted - moving it from straight representational to abstract. And it solved the problem for me.

And from the resolution came solution for the Memorial Day painting.

I put that painting back on the easel, without reorienting, and with thoughts of Major Kuss painted.

Retaining our colors (flag), silhouettes, and a few other color shapes, I added representation and some abstract (that some will conclude, rightfully, representational).

It seemed the painting painted itself.

Angelic intervention? My late Dad, too, a pilot (and artist who taught me).

I put the brushes down feeling no more needed to be said.

A title came to me a few hours later and I shared the painting with a Marine friend.

This morning the complete right title came to me: Down Angel Up 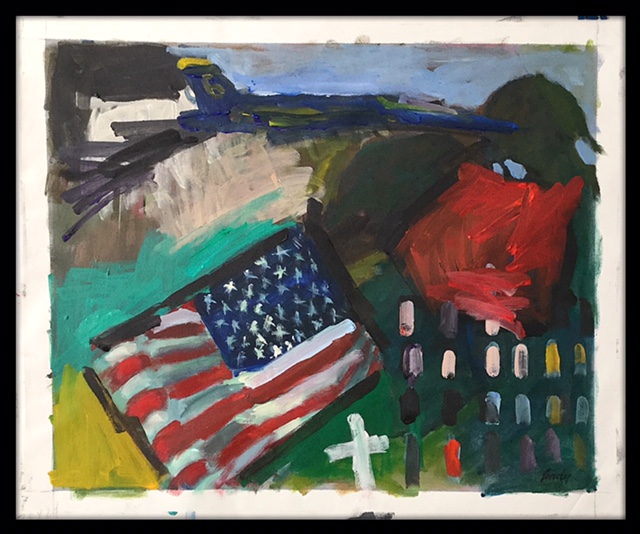 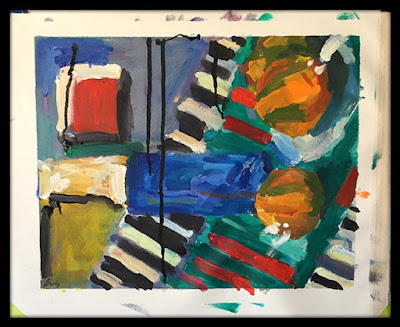 'Broken Bottle'
20 x 24 in. acrylic
Paul Gardner is correct - paintings stop in interesting places. Now two more in my studio are interesting (at least to me) and one built around Memorial Day means a bit more.
Prayers to the Kuss family - tough times, I know. But Heaven has another angel - my Dad assured me.
Post Script
The Memorial Day paintings are posted on Facebook public page: Weddington Art Gallery
Posted by A Colonel of Truth at 11:46 AM